How to tow your smart to safety.

Where Is The Towing Eye?

On the very early smarts it can be found in the left hand boot storage pocket. Thanks to John Bennett for that bit of info.

Where Does It Go?

Go to the front of the car and look to the left of the number plate, you will see a plastic cap. Lever this out carefully and keep it safe. Screw the towing eye all the way into this hole.

Go to the back of the car and you will notice two plastic caps, one on each side of the rear bumper panel. Lever out the side that corresponds to the towing point of the thing you are towing. Screw the eye in all the way. Common sense should tell you that you shouldn’t be attempting to tow another vehicle that is heavier than your own, this limits the type of cars you can tow. Remember the smart clutch isn’t that good. If you have a rear carrying accessory like the bike rack, these holes will be used already.

The fortwo and Roadster are not legally allowed to tow anything in any country. However, it is not illegal to have a tow bar fitted and it will pass the MOT without issue.

Although the smart is not rated to tow any weight, many people use them to pull light trailers. You have to fit an adapted crash bar with a tow ball on it, these aren’t cheap.

Be sensible when it comes to towing, you aren’t going to be able to tow even a small caravan unless it is one of those 2 person teardrop style ones that are barely big enough to get in. Keep trailers small and light, no longer than the smart and try to keep the weight down to under 100kg to save the clutch.

However, it is not recommended that you tow up to this weight very often as it reduces the operational life of the clutch severely.

The clutch is a dry system like in most cars and lugging excessive loads causes it to slip which increases wear and causes the clutch plate to glaze, glazing will cause it to slip even more. If you tow, make sure you have at least £600 put aside for a new clutch (including fitting).

Where Can I Get A Tow Bar?

Towing Behind A Motorhome

The Americans love towing a fleet of fuel efficient cars behind their ‘gas guzzling’ motorhomes, it wasn’t long until the question appeared and the arguments began. Read on, this is the truth.

The smart manual states you should NOT tow for more than 30 miles at a maximum of 30mph they are just covering themselves as the manufacturer of the gearbox (Getrag) impose no such limits.

As long as you have the car in neutral (N) you can tow as far as you like up to the legal towing speed limit with no problems at all. You can tow front up or back up on a trailer or tow flat (all 4 wheels on the floor) with an A-frame. With the ignition off, the mileage will not increase. If the gross weight of a car is more than 750kg, it is classed as a trailer.

Any car or trailer over 750kg must be braked (brakes operate with the brakes on the lead vehicle). A good A-Frame supplier will be able to offer you either a wire operated, electrical operated or vacuum assisted trailer braking systems.

It’s worth noting that the gross recorded kerb weight of the 450 is less than 750kg so you don’t necessarily need to brake the 450 when towing on an A-Frame. Although, I would still recommend it.

Where Can I Buy An A-Frame

*Although smart recommend towing with the ignition on this is quite clearly unnecessary as long as the gearbox is in neutral and the car can free wheel. If it wasn’t the case, you wouldn’t be able to tow a smart that had a flat battery. I believe that smart have put this so the mileage increases as you tow, of course, you don’t want that.

It must be mentioned that this particular tow bar is for “off-road use only”. The smart 450, 451, 452 Roadster and 453 weren’t homologated to tow anything so can’t legally tow.

Check your owner’s document. Technical permissible maximum towable mass of the trailer will either show zero or the field will be left empty. Both of with indicate that it has no legal towing capacity. 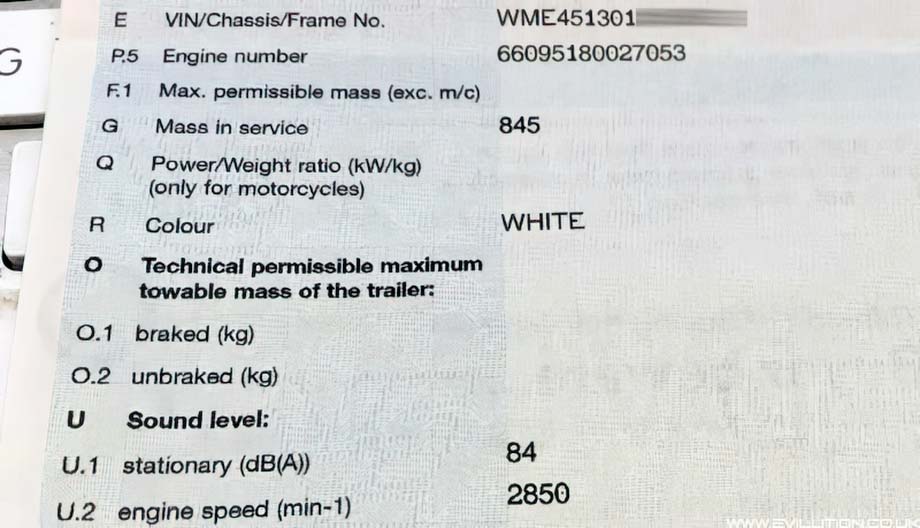 You can still legally use the tow bar for tow bar mounted bicycle racks etc. You just can’t tow anything. If you don’t believe the V5C (or regional owner’s document for your country), look at the VIN plate.

Just below the VIN code are 3 sets of numbers.

The fact that there is only 3 numbers tells you that the car is not legally homologated to tow.

If your car is legally homologated to tow, it would have 4 numbers.

On these vehicles, “Gross Train Weight” minus “Gross Vehicle Weight” gives you your maximum trailer weight.

Therefore, if you take the maximum train weight and minus the vehicle weight, you get 800kg So, for this particular car, you can tow a trailer with contents weighing up to 800kg.

It’s Legal In My Country/State

It’s clear that you aren’t actually interested in the truth and you are going to do your own thing anyway. So why the hell are you even reading the facts if you aren’t going to believe them? Substituting facts with your bullshit made up bollocks isn’t going to suddenly make it true.

The Chances Of Being Caught

Slim to none. You have to remember that the police who enforce this rule are generally ignorant of the rules, even more so than you, and that’s saying something. The people who do know the rules are the insurance company. If you tow, you are breaking their terms and conditions knowingly so you aren’t actually insured. If you have a crash, you won’t be covered and you can be prosecuted.

You know the rules so it’s up to you. You are taking the risk. Very few burglars get caught but that doesn’t mean it’s OK to do.