With the change of rules about speeding in the UK, it makes sense to get a speed camera detector.

It really is small, no bigger than some of the original USB memory sticks. But we all know that size is nothing if the product turns out to be total crap. This is what you get in the package, the K1 camera detector, a clip and some documentation.

Even if you got the camera detector for £39.99 it sounds cheap but you get much more than that. You also get a cigarette lighter socket to USB charger, these are £4.99 on their own. On top of that you also get a lifetime speed camera subscription, that should cost £19.99.

So essentially you are getting £25 of free stuff in a package that doesn’t cost much more. 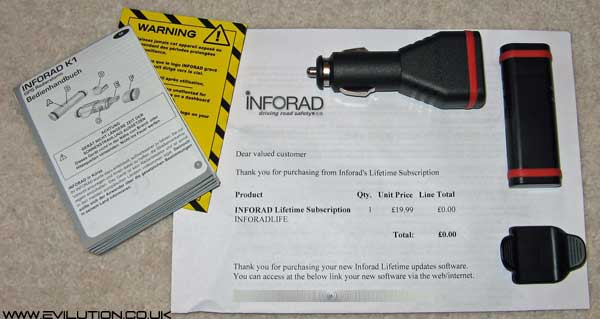 So, Does It Work?

In a word, yes. With astounding accuracy using a SiRF starIII receiver, amazing for its size.

You download the software (PC only), pull the cap off of the K1 unit and plug it into a USB port. The software allows you to update the camera locations, not just for the UK though. It has 2 files that cover nearly all of Europe. You can swap between these files as you see fit depending on where you are driving.

You can set the amount of warning you get before you are in the speed camera’s watchful eye, you can set the cut off point for when you have passed it. There is 1 disadvantage here but I will come back to that later.

There Is No Display

Correct, that is how they keep the cost of the unit down. What would be the point of having a small screen on a small unit, it would be a nightmare to read in any conditions. It makes do without a display by using a 3 colour LED.

When the LED initially changes colour, you also get 3 beeps to alert you to the upcoming camera. The alert tone cannot be changed, nor can the volume. LED brightness adjusts automatically depending on the time.

Can It Do Anything Else?

Well, yes, but this is where the unit becomes a bit annoying.

When you approach a speed camera, if you are exceeding the speed limit it lets out a continuous 2 tone alarm until you drop to the speed limit or below. This would be a helpful or handy tool but for 1 major problem. The software will not allow you to reduce this alarm distance to less than 15 seconds before you get to the camera. Personally I found this to be way too long.

I’m the first to admit that I break the speed limit between cameras but never more than about 6 or 7 mph over. This unit doesn’t care, if you are over, you are over so at every camera you get an annoying 2 tone alert for about 12 seconds as you slow down to the correct speed. I would like to see the software change to make it more adjustable, a 5 second warning would be ample for most roads.

Another unusual addition to a unit like this is a trip recorder. The software allows you to set the K1 to save your position every 1, 5 or 10 minutes. This log can be downloaded from the K1 and used in software such as Google Maps to allow you to plot the journey. It’s good for keeping journey logs or perhaps keeping an eye on your partner but not much else.

Where Can You Buy It?

Yeah, why not. It’s cheaper than a single speeding ticket. That on its own makes it worthwhile.