There seems to be confusion over which oil can be used in the smart, luckily it happens to be very simple and covers all of the smart models.

There are three main types of oil:

You must use fully synthetic oil in your smart engine.

How Can I Tell If It Is Fully Synthetic?

It should state this info somewhere on the bottle, if it doesn’t tell you in straight English that it is fully synthetic then generally they are hiding something or trying to blind you with science. Don’t buy any engine oil which does not have the ACEA and API rating on the label.

Let me start off by saying, Mercedes Benz oil standards are pointless.

Firstly, they have only tested 1% of all of the oils available so even they don’t know what oils are OK to use.

Mercedes used to sell Mobil1 oil because they were prime advertisers on the F1 cars. Mobil1 oils aren’t as good as people think, check out this independant test and see how badly it did. Thankfully Mercedes realised how shit the Mobil1 oil was and changed their supplier to Petronas. Even though Petronas also advertise on F1 cars, the oil is actually very good.

So, as long as it’s the right viscosity, is fully synthetic and has the API and ACEA ratings, it should be OK. However, since the Mercedes oil is made by Petronas and is reasonably priced, you may as well buy it from them. So, ALL smarts will use MB229.5 oil EXCEPT the 54bhp cdi 451 fortwo.

You can but it’s really not good for your engine. The things that they take out to make MB229.51 oil are actually beneficial to the lubrication of the engine. Sulphated Ash, Phosphorous and Sulphur are good for the engine.

It’s the anti-wear compounds added to the oil that contain most of the phosphorus and sulphur.

Anti-wear additives like ZDDP (Zinc Dialkyldithiophosphates) contains phosphorous, MoS2 (Molybdenum Disulfide) contains sulphur and the detergent additives create sulphated ash when burnt. Removing them creates a low SAPS oil that isn’t as effective in protecting the engine as mid or high SAPS oil. The oil companies are looking into replacement additives and detergents but what they currently
have just isn’t up to scratch in comparison. However, as mentioned, you have no choice.

These standards are the one you need to pay attention to if you have the 54bhp 451 fortwo CDI. Unlike the 45bhp model, the 54bhp has a DPF (diesel particulate filter) and absolutely requires MB229.51

The difference is that MB229.51 has low SAPS (Sulphated Ash, Phosphorus and Sulphur). These damage the DPF by blocking it. So, low SAPS oil is essential.

It doesn’t really matter. For it to be classed as a fully synthetic oil at a particular weight (0W-40, 10W-30 etc) it has to pass tests and be within stated guidelines. People still feel better about using big brand names like Mobil1, Shell Helix and Castrol although Royal Purple seems to be way better in every way when it comes to engine wear.

Where Can I Buy The Best Oil?

The easiest way is to go to a smart dealer. However, you can buy it online too.

These pair of numbers are known as the weight. These tell you the viscosity (thickness) of the oil.
The first number is its cold viscosity, as the oil heats up it thins out allowing it to flow better.
The lower the number, the thinner the oil is.

The W stands for ‘winter’ which is the thickness of the oil at 0° Fahrenheit (-18°C).
It is measured by the number of seconds it takes for a set amount to be pumped through
a tube of a particular size. This piece of aparatus is called a viscometer.

So What Oil Viscosity Do I Need?

It actually depends on the ambient temperature of where you live. 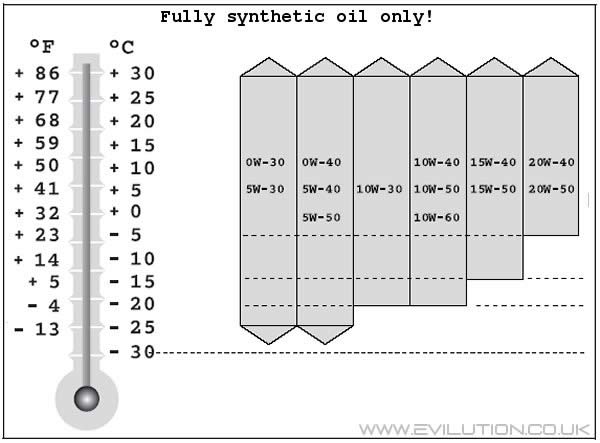 If you live in a very cold climate like Canada then you should consider 0W.
For us in England (which is a warm climate no matter what your Nan says) you are best off with 10W (or 5W if you really have to). For the hot places like Spain, consider 15W or 20W.

No, they are really designed for use in cold climates and performance cars (smart cars don’t count no matter what BHP you claim). Lower W numbers give better cold starts that protect the engine quicker as the lower temperature of the climate allows enough oil viscosity to cling to the engine parts to protect them but also allows the oil to flow through the system at a reasonable pressure and speed.

Using 0W in a smart engine in anything but a cold climate will cause faster engine wear on cold starts.

Cold start damage happens in the 1st 10 seconds. It takes a smart engine 3 – 4 seconds to build up oil pressure and another 3 – 4 seconds to properly coat everything, by which time, the damage is done. Low viscosity oil drips off of all of the components when the car is standing. Higher viscosity oil maintains a thicker film on all of the components so there is more oil there as the car starts.
The other issue is that the smart engine drains the majority of its oil back into the sump when the engine isn’t running. Within 10 minutes of standing, the turbo cartridge is empty of oil. This is bad for the turbo when it starts up again as the shaft floats on oil bearings. Again, thicker oil leaves a little bit more oil in the turbo to overcome the friction momentarily as the oil pressure build up.

Mitsubishi make the petrol engines and they seem to recommend 5W-30 no matter where you are. 5W-30 is fine unless you live in a VERY cold or VERY hot country in which case go for 0W for very cold and 10W for very hot.

This is where smart start confusing things. The diesel engines are Mercedes units and the fortwo diesel has the same engine in both the 450 and 451 variants. However, in the 450 the recommend 10W-40 for UK temperatures but 5W-30 in the 451.

I have tried both of these in my 451 diesel and it was fine and I do a lot of miles.

For the Forfour, I’d stick with 10W-40 and vary that up or down for cold or hot countries.

Renault/Nissan make the petrol engines and they seem to recommend 5W-30 no matter where you are. 5W-30 is fine unless you live in a VERY cold or VERY hot country in which case go for 0W for very cold and 10W for very hot.

Smart published a list of acceptable oils for use in smarts to all their garages. However, this does not mean that every oil below is suitable for your smart. You should still use an oil designed for the environmental temperatures in your country.

The best option is just to go to a smart dealer, walk into their parts department and ask for MB229.5 oil. You’ll get good quality oil and it’s not expensive.

0W-40 is NOT the quickest way to protect your engine from cold start up. So ‘Paul‘ if you insist on saying I am wrong, at least have the balls to put your email address. I said nothing about ‘Race or track cars’, I said performance cars. Race and track cars require the least internal friction to release the most power from the engine. These engines are also rebuilt every few thousand miles. The smart engine isn’t.

You may see a marginal reduction in miles per gallon as there is slightly more resistance in the engine whilst the oil is cold. When it reaches the proper operating temperature, it’ll be the same as thinner oils.