The oil sump pan is made of mild steel and is in a vunerable position under the car. It gets covered in salty water, peppered with road grit, hit with roadkill and struck with debris.So it’s of little wonder as to why the coating doesn’t hold up for long and rust sets in.

Eventually, as can be seen here, the rust creates tiny perforations so the engine oil starts to seep through the sump. The oil sump will look rusty and always wet. Time to change it. 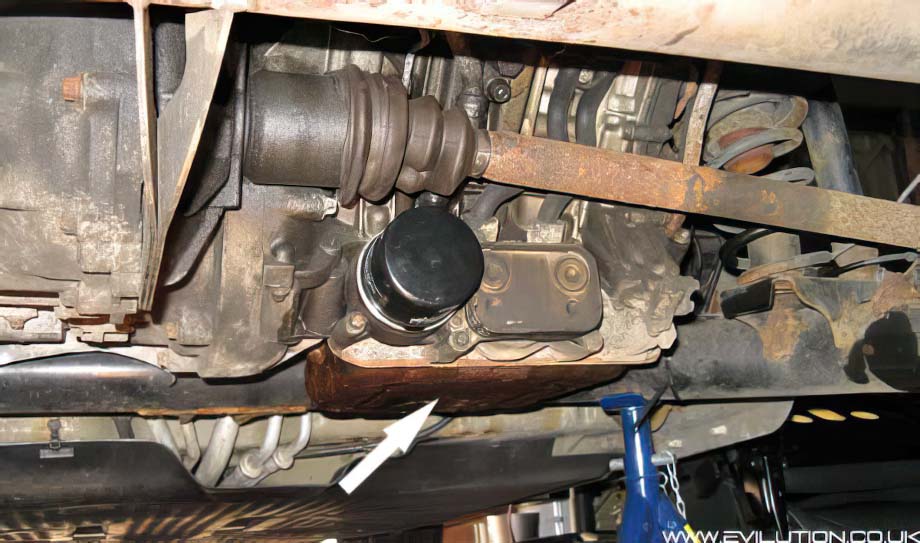 This sump is 80,000 miles old on a 2004 plate Roadster. You can see the oil level in the rust! The first thing you have to do is remove the oil using a pump as seen here. 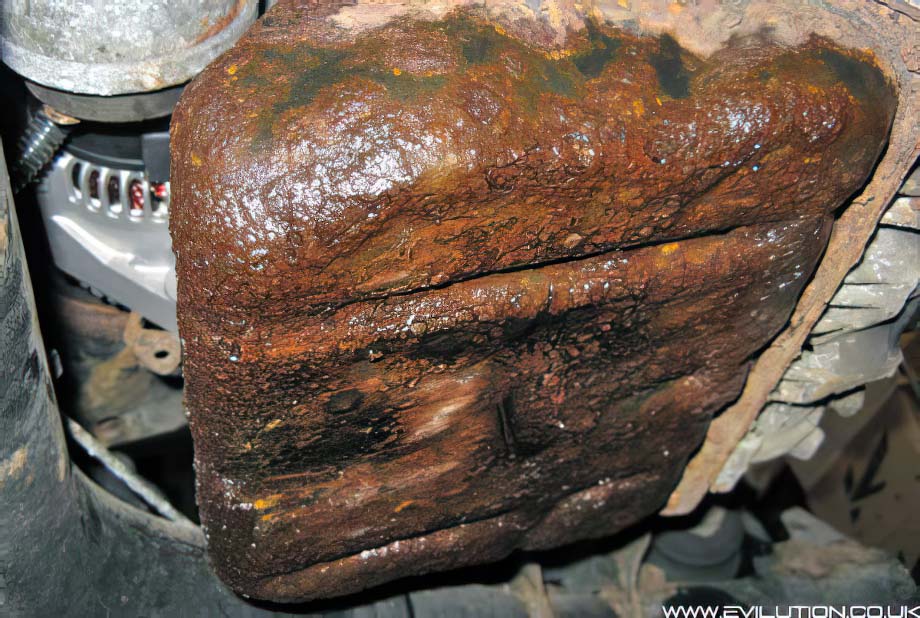 Around the outside of the top of the sump is 14x Torx bolts, You’ll need an E8 socket and an extension bar to reach. You will need to jack the car up as high as you can. Make sure you secure the car properly when lifted as you will be underneath it.

Safety goggles would be a good idea as you’ll get a lot of rust dropping into your face. Spray all 14 of the bolts with PlusGas a day before attempting to remove the bolts. The last thing you want is to snap one of these small bolts off. 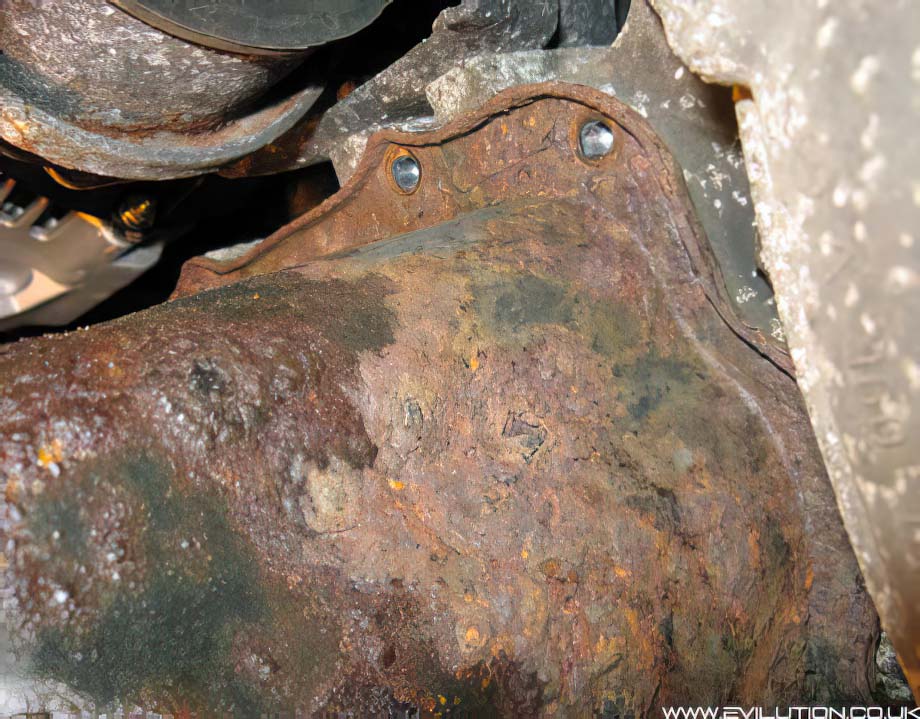 With a thin chisel, flat blade screwdriver or gasket scrapper, carefully start levering the old sump off. It is important that you don’t damage the mating face of the engine. If you have room you can just pound the side of the old sump with a hammer to shock it off. 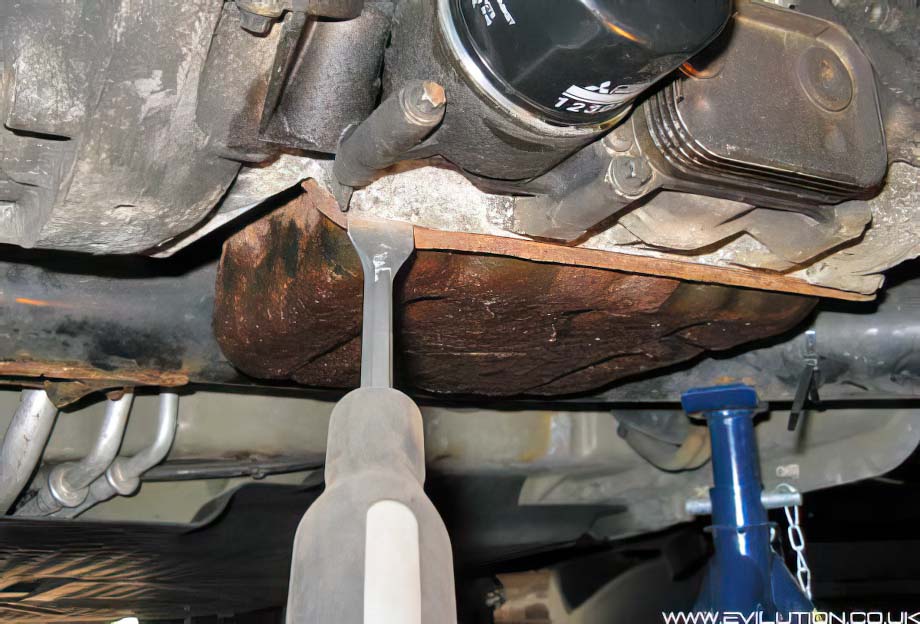 The sump will eventually come away from the car. 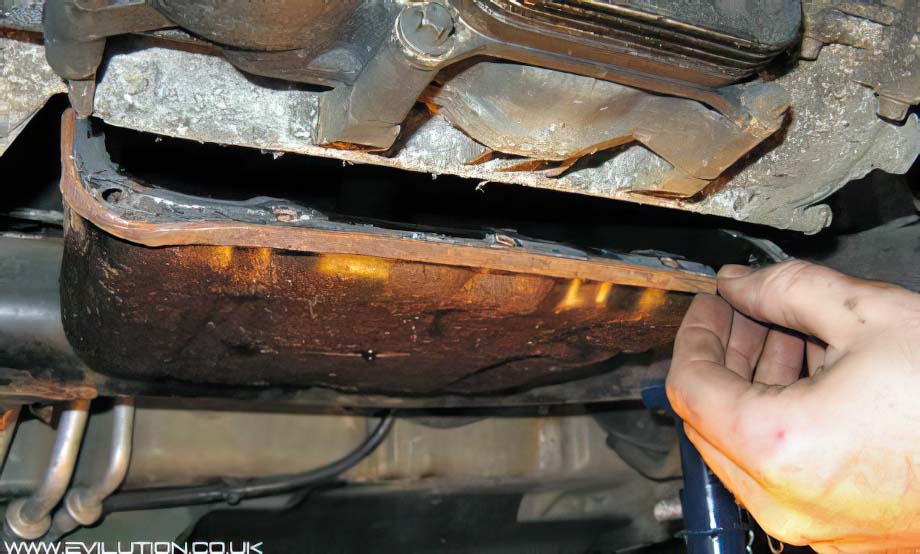 Clean the mating face of the engine where it would touch the oil sump pan. It is important that you do this well and properly, especially if you are using liquid gasket to reseal the sump. Scrape any sealant off, use a blade, abrasive pads or wet and dry sandpaper. The cleaner it is, the better chance you have of resealing it. 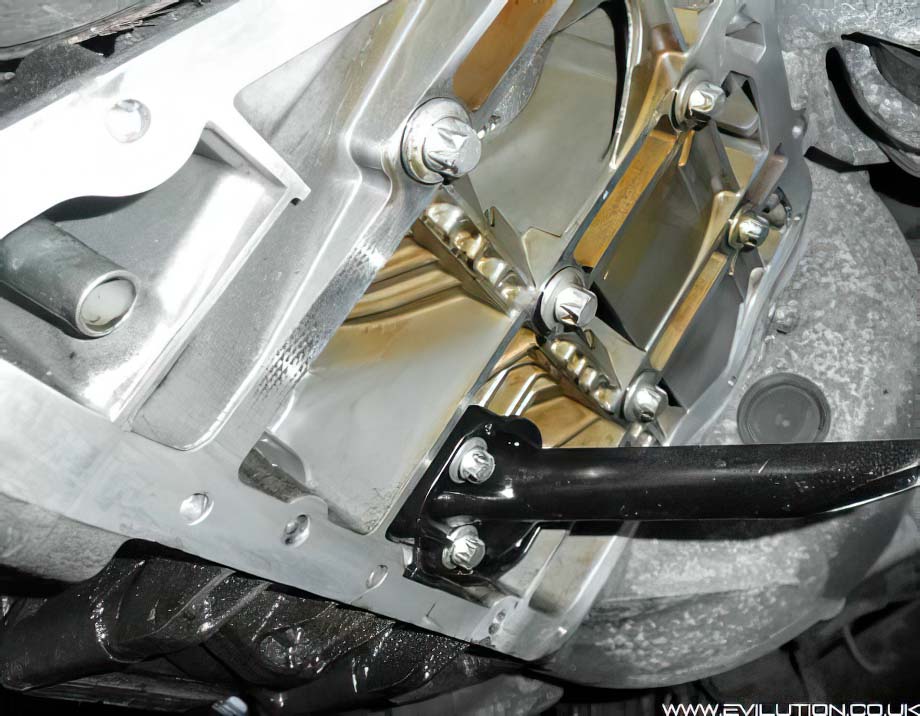 Create a 3mm bead of sealant around the new sump pan (smart part number A1600140002) ensuring that you do a full loop around the bolt holes. It doesn’t have to be pretty. A new sump pan from smart isn’t expensive but as you are fitting a new sump, why not get one with a drain plug? There are plenty on eBay. Personally I prefer the metal ones but there are composite sumps available too. 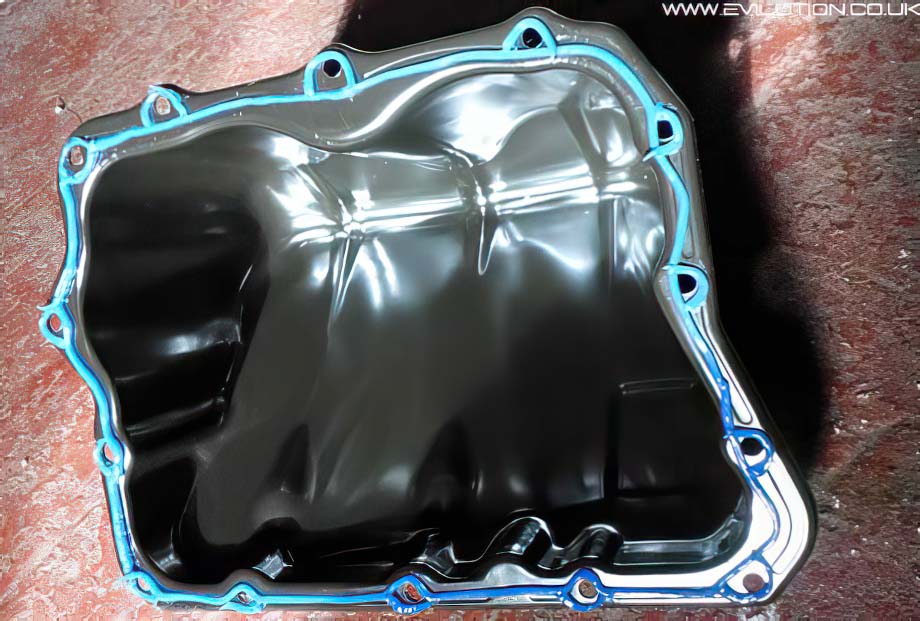 Leave everything for 45 minutes before attempting to put the new sump in place. This allows the seals to cure very slightly, increase viscosity and absorb the water from the air so it can set. Place the new sump loosely into position and hold with a few new sump bolts. (smart part number 14x N000000001115) Don’t be tempted to reuse the old bolts.

Go around all 14 bolts and tighten them slightly, go around again and tighten slightly more. On the 3rd time around you should finally tighten them to 12Nm. If your torque wrench doesn’t go that low (mine didn’t), you’ll have to guess. Quite tight is fine.

Allow the sealant to set for 24 hours before slowly filling the engine with oil to the correct level. Keep an eye out around the edges for any leaks. If you get any, try nipping the bolts up near it. If that doesn’t work you will have to start all over from the beginning.

Why No Pictures Of The Sealing Phase?

That’s easy, as per normal I deviated from the instructions simply because I had heard far too many people discovering small oil leaks when they fitted the new sump. Even smart specialists.

I didn’t have time to mess about waiting for 45 minutes for it to set enough to fit and another 24 hours before I could see if it had sealed properly. Liquid gasket is a bodge and not that reliable. Plus I don’t like the idea that some could get into the oil pan and float around the oil system.

Nothing can better a rubber gasket on a flat surface. So I made a gasket. (actually, after the success, I made loads, check the bottom of the page) 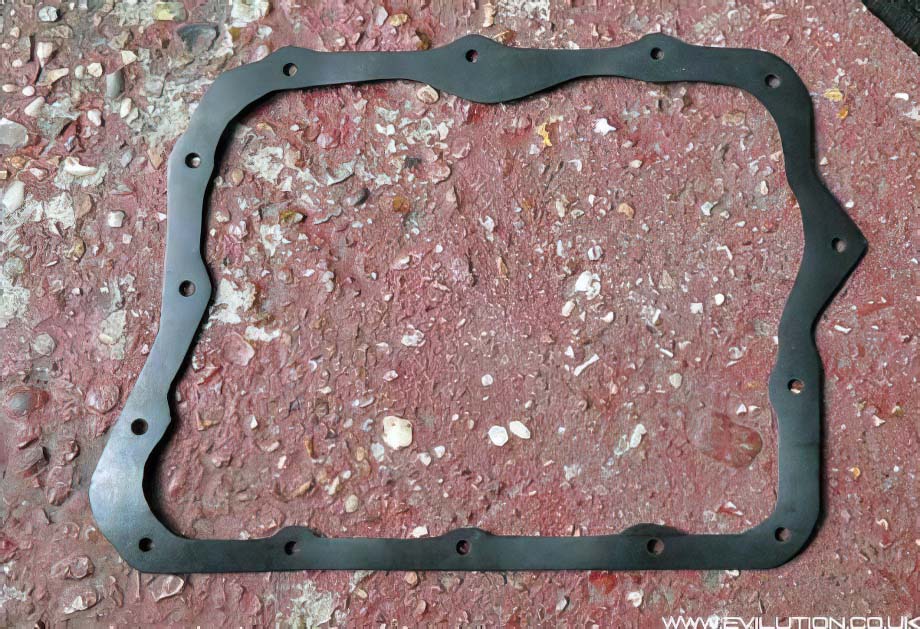 The gasket rubber isn’t cheap to buy but it makes life easier in the long run.

Visually check the gasket before fitting and give a little stretch all of the way around. These are die cut from new vulcanised nitrile and stored individually in acid free paper, inside a separate envelope, inside a cupboard away from the sun and heat. However, they have to go through the post which could cause damage and I have no control of how you store the gasket before you bother fitting it. So check it well before fitting. 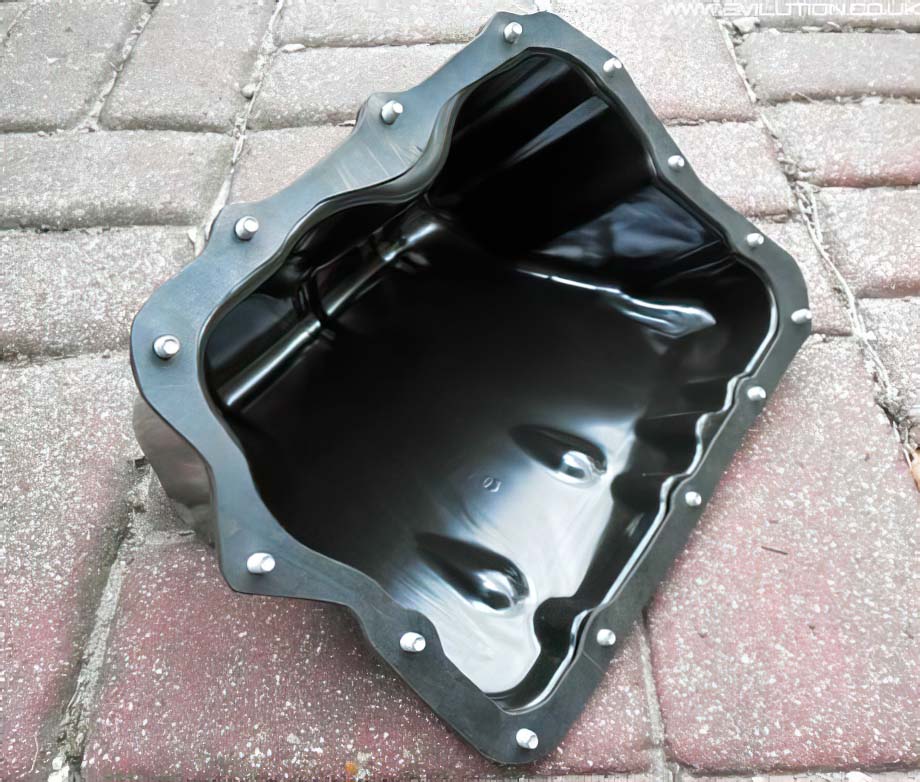 DO NOT OIL THIS GASKET BEFORE FITTING. Ensure that both mating faces are clean and dry. Oiling the gasket will allow it to slip as you tighten the bolts. The gasket could slide out totally. DO NOT USE any other sealing products. All of the failures I have seen with this gasket have been because of the above issues.

Tighten in stages as mentioned previously until you reach about 5Nm. 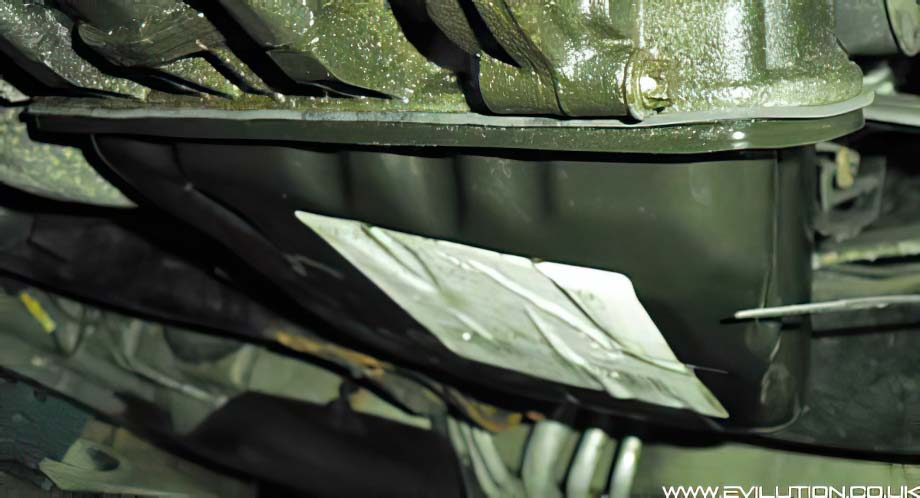 There wasn’t even a hint of oil leaking out anywhere and if you ever need to remove the sump again, it’ll be far easier next time as the 2 parts aren’t glued together.

These gaskets will fit:

These are now available to buy. These are cheaper than a tube of liquid gasket and easier to use.

Was unique to Evilution until an Italian company copied it.

Despite them copying my application, they still sell theirs for more than I do when you take into consideration the hidden postage costs. Everything sold on this site goes back to running the site. We don’t pay ourselves wages.

I’d also like to point out that Boston Dynamics used my gasket in an unreleased version of their Big Dog robot that used the smart diesel engine.