Orange Roadsters look good but only when it's paint. Fire doesn't look very good at all on a Roadster.

Fire! I’ll Take You To Burn

Smart recalled many of the 451 fortwos in 2014 because of an electrical issue that could cause a fire. It was a rare occurrence but it happened more than once. However, they have never admitted the issue with the Roadster.

In January 2015 I heard about the 5th Roadster that burst into flames for no obvious reason. These are just the ones I know about. On all 5 occasions, the fire started in the same place. That’s far from coincidental. 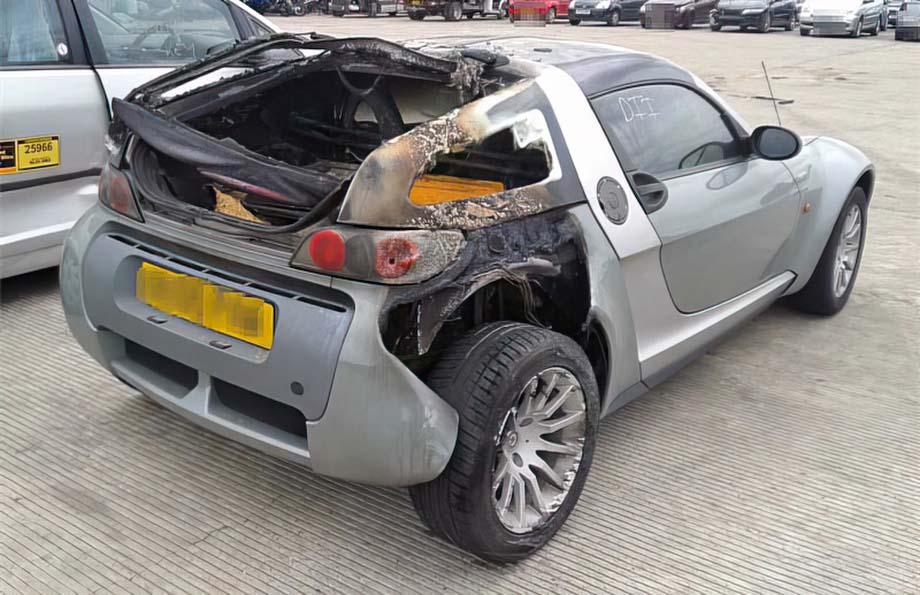 Here’s the problem. It’s a rare issue and the 1st you know about it, your car is on fire. By the time it is put out, any evidence that could point to the exact cause of the fire has been destroyed. Whatever the problem is, it won’t happen immediately, it’ll be something that occurs over time and ends with a big firey mess that reduces your car to an insurance write off lump of smelly carbon.

So, the idea is to pass on what I know so more people can check the area to see if they can catch the problem before the car becomes hot, orange and flickery.

…or left/right/left/right if your car is on fire and you are running around like a fool.

The 1st Roadster I saw with this problem was in 2006 and the driver was lucky. Not only did he have a fire extinguisher, he managed to disconnect the battery very quickly. So, in this instance, the only damage was to the panel and the wiring which ulimately caused the issue in the first place.

The next 4 Roadsters I heard about weren’t so lucky, here is 1 of them caught on camera.

It shows the area were these fires always seem to start. If you remove the rear panels, there is a wiring loom over the top of the arch. It carries several thick earth wires, power for the fuel flap solenoid and some rear lights. 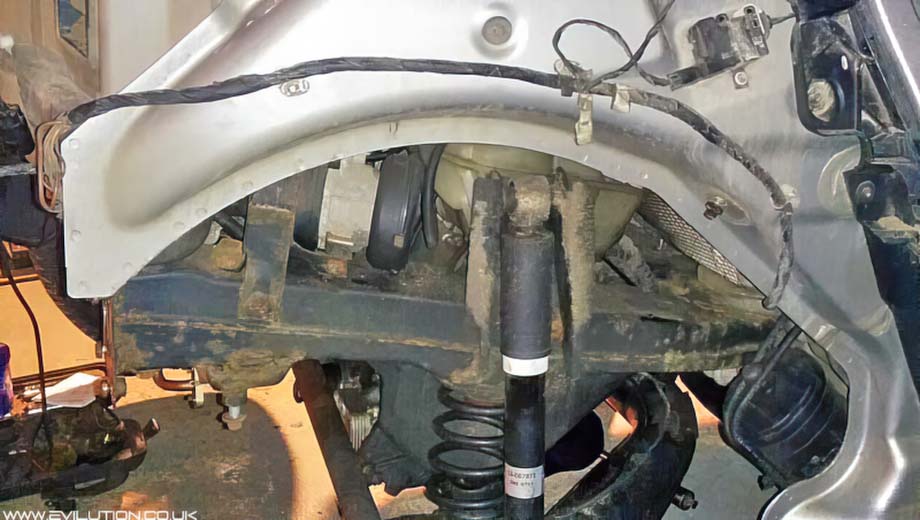 The main focus is the point where the wiring loom passes between the Tridion and the arch liner (removed in this photo). Smart do like to make their looms tight, the arch liner can press against the loom and push it into the Tridion. 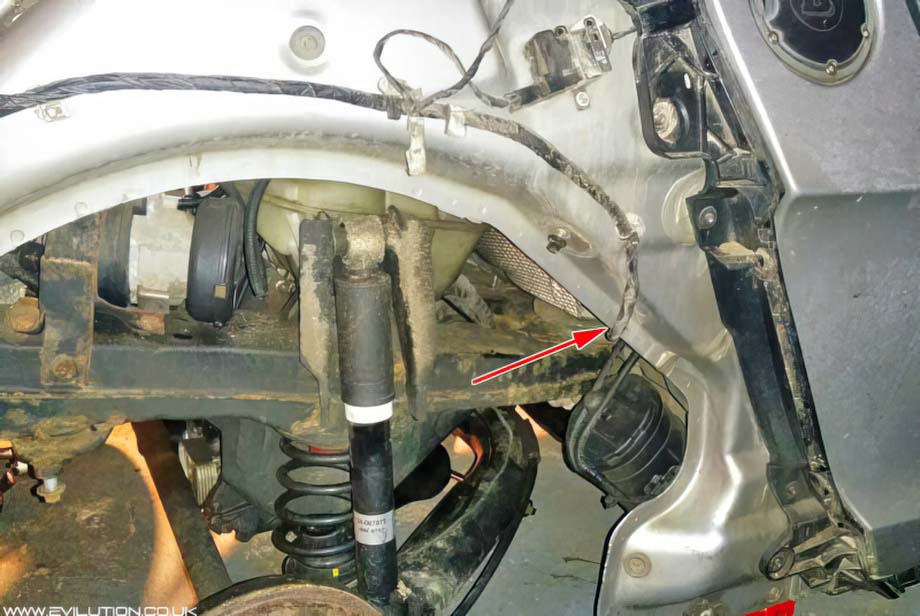 The problem is that the metal Tridion is a sharp edge and the wiring loom is just plastic coated wire. 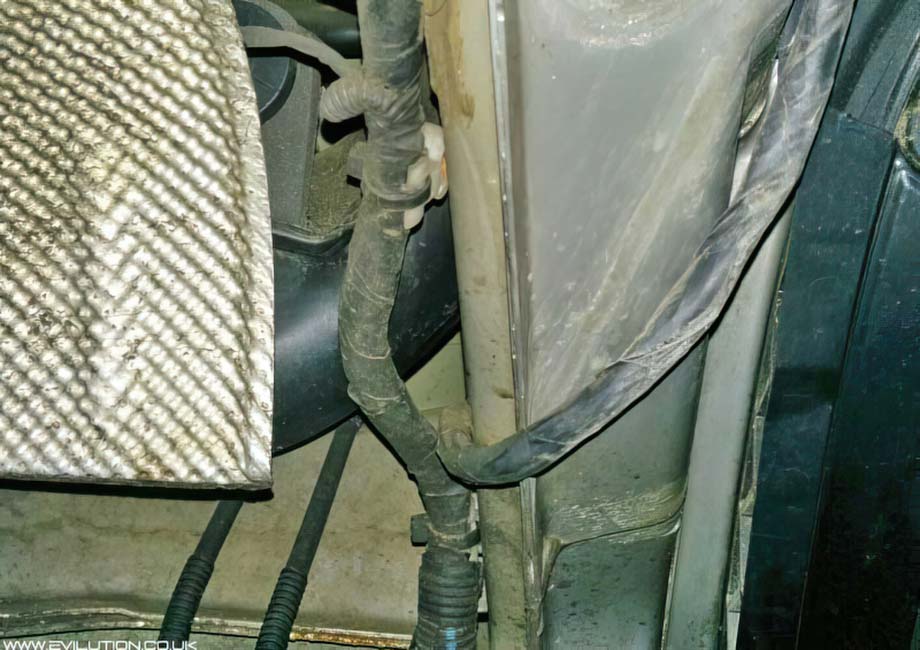 So, it’s fairly obvious which one is going to wear through first. 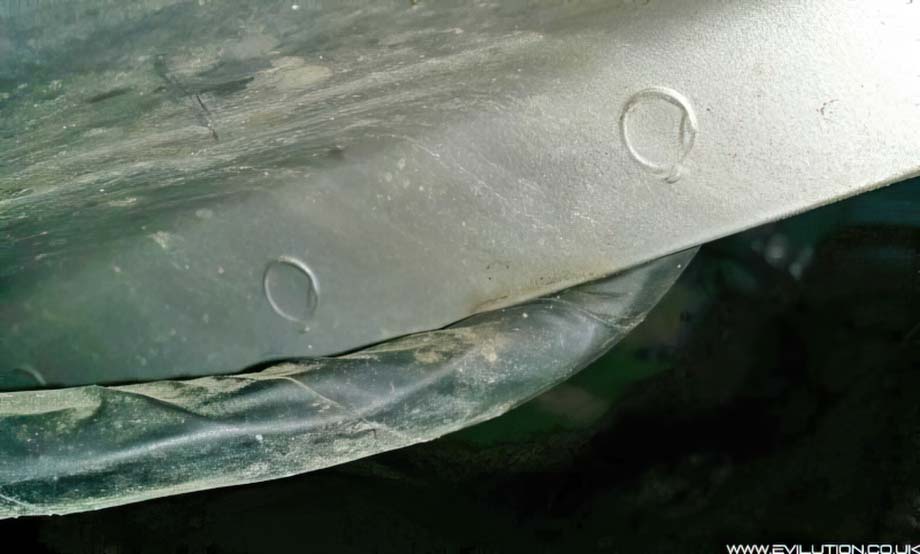 Looking at the thickness of the earth cables exiting the loom at the back of the car, it’s clear that a fair bit of power is being grounded through this loom. It looks like, over time, that the wires wear through until an earth cable touches the Tridion.

We all know that electricity takes the path of least resistance so it would be happier to go from the wire straight to the Tridion than it would be to carry on to the end of the cable to ground where it’s supposed to. 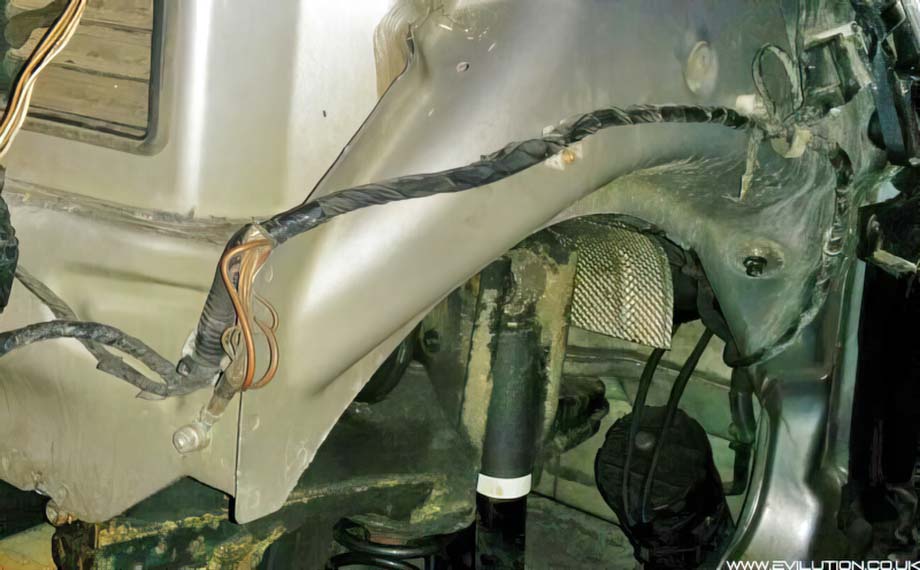 However, as this newly formed grounding point isn’t fixed, you get movement which causes sparks and arcing between the wires and the Tridion. The plastic of the wires and the tape used to wrap the looms up will eventually ignite and cause a fire which spreads along the loom, sets fire to and melts the fuel flap solenoid unit and eventually the arch panel and arch liner.

The other possibility is that the cable rubs and thins out to the point where the power passing through it makes it glow like a bulb filament. Easily hot enough to set fire to rubber and plastic.

Tom contacted me to say that he was getting wear due to a tight loom where it passes over the rear body seam. 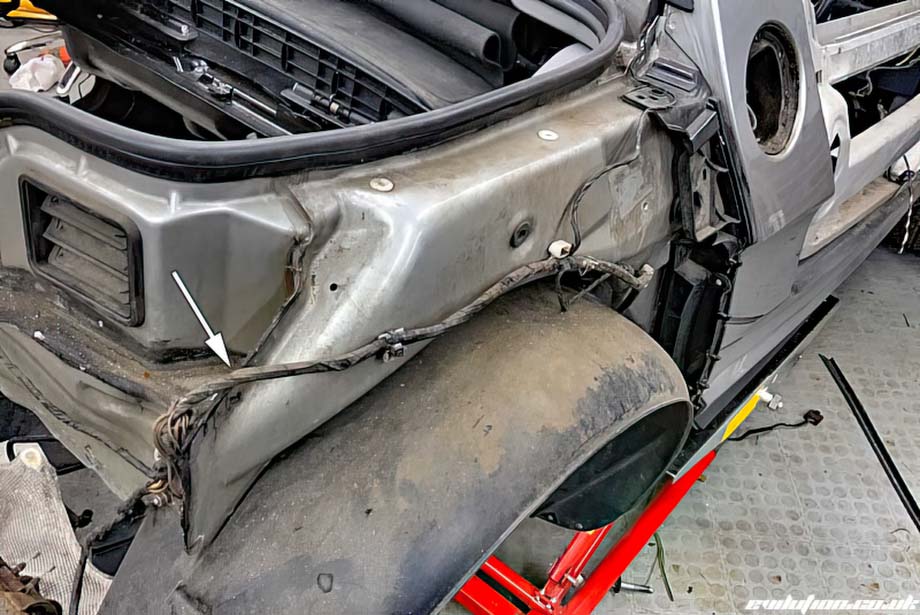 It’s worth checking this point as well.

I’m asking all Roadster owners to check this area the next time you have the rear panels off. If you find anything unusual, please take a photograph and send it to me.

Any Prevention Or Cure?

The obvious answer is to wrap the loom in the problem area with something to stop the rubbing of the Tridion from affecting the loom. However, for a longer term solution I’d be tempted to grind the Tridion away slightly in the area.

At least then it’s reduce the pressure on the loom and the rubbing from the arch liner. Obviously repaint any part of Tridion you grind away and still wrap the loom for extra protection. 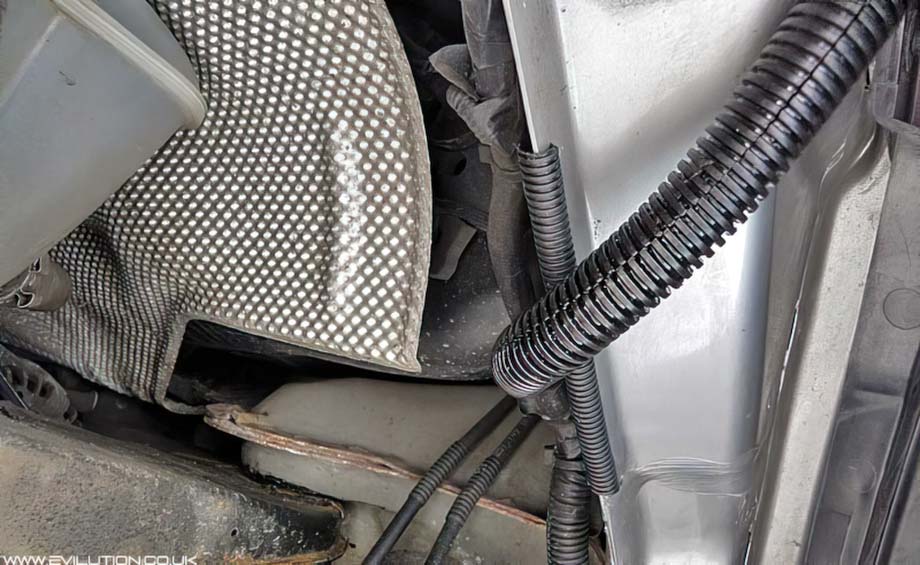 Possibly, at the current time, it’s hard to be totally sure but check these too. 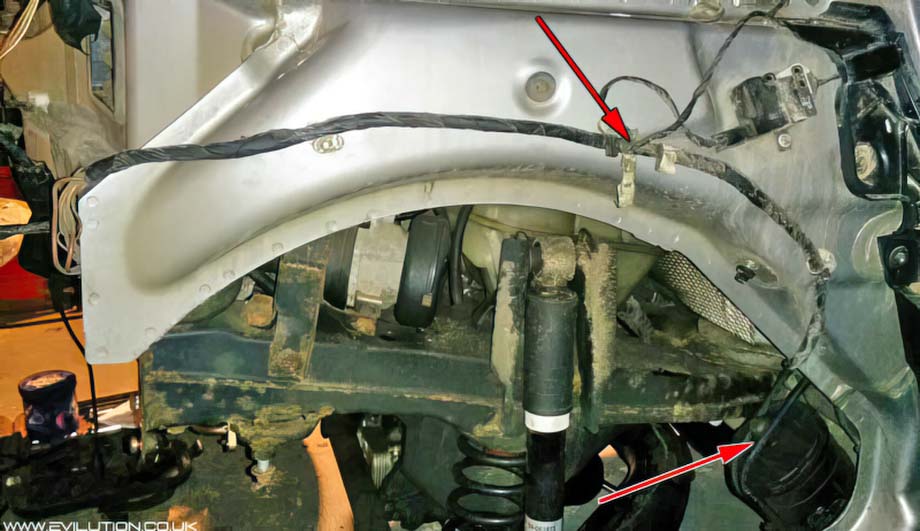 The 1st Roadster I saw that was saved with a fire extinguisher had most of the burning by the top arrow although there didn’t seem to be a good reason as to why. I didn’t inspect the loom so maybe the flame passed up inside.

The 2nd possible issue is the fuel tank evaporator cartridge which is arrowed below. When you fill up with fuel, the air that is being replaced in the tank passes through a charcoal tank before joining to the top of the fuel filler hose. If you try to fill your tank up to the absolute top or fill up with a jerry can, it is very easy to get fuel into the breather hose. The nozzles on jerry cans are usually too short where as a normal pump nozzle will sit passed the breather hose.

The charcoal cartridge is designed to filter petroleum vapour from the air being expelled, it isn’t designed to handle actual fuel so if fuel makes it down the breather pipe, it will sit in the charcoal canister and stay there. A valve further back stops the fuel/charcoal from draining into the tank but it still means you have a vented container full of flammable liquid right near a possible source of ignition.

It’s hard to tell if this is a factor in the fire but it is worth closer examination.

What Conduit Should I Use?

Don’t buy anything special. You probably already have something that you can use. The most obvious one is to cut a few inches from your hose pipe, split it in half and cable tie it over the wires. Garden hose is about 13mm ID so any cable protector between 13mm and 15mm ID should be fine. I don’t recommend using the spiral wrap stuff.

What About A Fire Extinguisher?

A prevention is better than a cure. If you have a fire, an extinguisher is better than nothing. However, electrical fires don’t go out. You might put the fire out but unless you disconnect the battery, the short circuit will continue to cause sparks and heat and eventually more fire.

You really need to be able to disconnect battery as quickly as possible. Click.

Fire extinguishers for cars are generally shit. They make a terrible mess and you need an extinguisher for electrical and fuel fires, just in case. What makes it worse is that a fire extinguisher that’s small enough to sensibly fit in a car will only work for about 10 seconds and tend to lose pressure over a few years.

Thankfully there’s a new type called a fire suppression stick. These are really clever. They are like a flare but it burns potassium nitrate which burns the oxygen and outputs nitrogen in big quantities. Nitrogen is an inert gas that doesn’t burn and therefore the fire is smothered.

The advantages to this system is that the stick is very small, has a 10 year shelf life and can fight a fire for longer. There are options for 25 seconds (yellow), 50 seconds (red) and 100 seconds (red&yellow).

Thanks to Andy S (Angel_Boy) for the photos.
Thanks to Alistair G (Inchbeag) for his fix.