Snapped studs are a fact of life on the smart, the engine block is aluminium, the turbo studs are copper, exhaust studs are soft steel.

Before attempting the removal of a seized or snapped thread, it is of paramount importance that you attempt to lubricate the thread. It could be the difference between a 5 minute job and an all day job that needs specialist tools that you probably won’t have.

Forget WD40, anything that is designed to do more than one thing generally can’t do anything well. WD40 is a water dispersant, not a penetrating lubricant. Don’t use it.

Make sure you purchase some proper penetrative lubricant like PlusGas, or make your own.

Spray it on at least 20 minutes before you start the job to allow the oil to penetrate. It is also recommend that you try to put some heat into the surrounding area to expand the metal. This movement can break any mechanical bond that’s holding the stud in place.

So get your gas torch out and try to heat it until red. Let the heat penetrate. Try not to directly heat the stud or it’ll expand at the same rate.

If you don’t have good access to the stud, don’t waste your time trying to work in small gaps or around things that are in the way. Trying to be a hero will just waste time and will probably cause all of your efforts to fail.

Remove the part from the car and do the job properly. In the long run, you’ll save time and be thankful you did.

If you are lucky to have enough stud showing and the thread isn’t damaged, you can attempt the original stud removal trick. Spin two nuts onto the thread. Then spin the top one down and the bottom one up so they eventually touch. 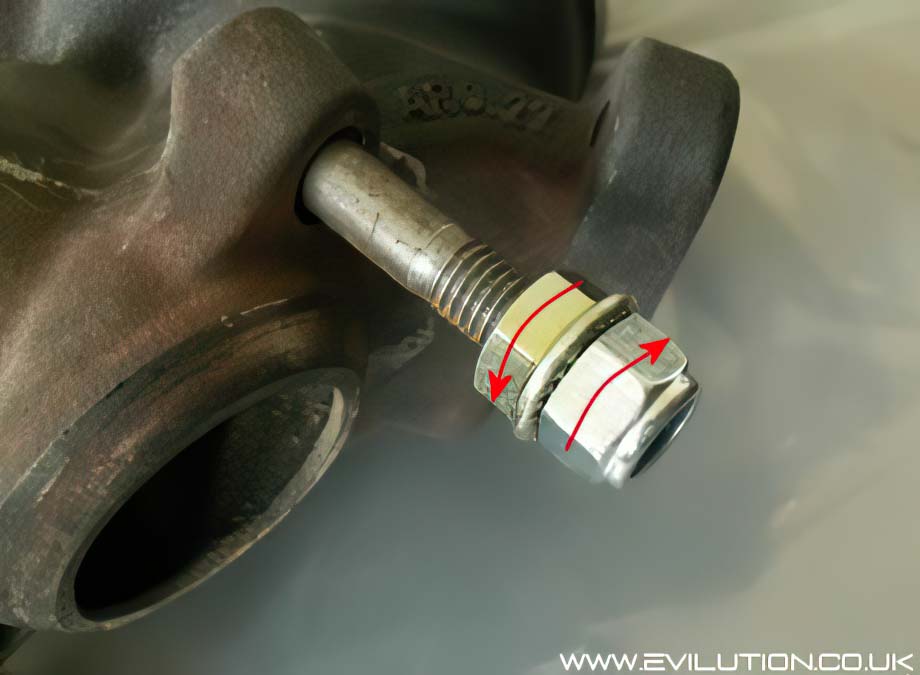 Using a pair of spanners, twist the two nuts against each other with force. Now use one spanner on the buttom nut as if you were undoing it. The nut will be locked against the upper nut so should not spin at all, hopefully the stud will spin instead.

Usually the first thing people try when they encounter a seized stud, they break out the WD40 and a pair of pliers or grips. This is usually a bad move, WD40 is a poor penetrant. Pliers just don’t give that much purchase as the surface area of the stud is quite small. Grips tend to deform the thread and strip it as you turn, this loosens the grip.

The other problem is the force transfered from the grips to the stud isn’t centred, this uncentred force can bend or snap the stud you are trying to remove.

If the stud has snapped off inside or level with the surface, this is one of the options. The first job you have to do is drill the stud that has snapped in the hole.

Drilling is made easier if you use a centre punch on the top of the stud first, this gives the drill bit a starting spot instead of slipping all over the place. Drill the stud out as straight as you can.

If you drill it with a reverse twist drill bit you can sometimes be lucky as the bit can grab as it drills and spin the stud out. Thanks to Ron B for that thought. 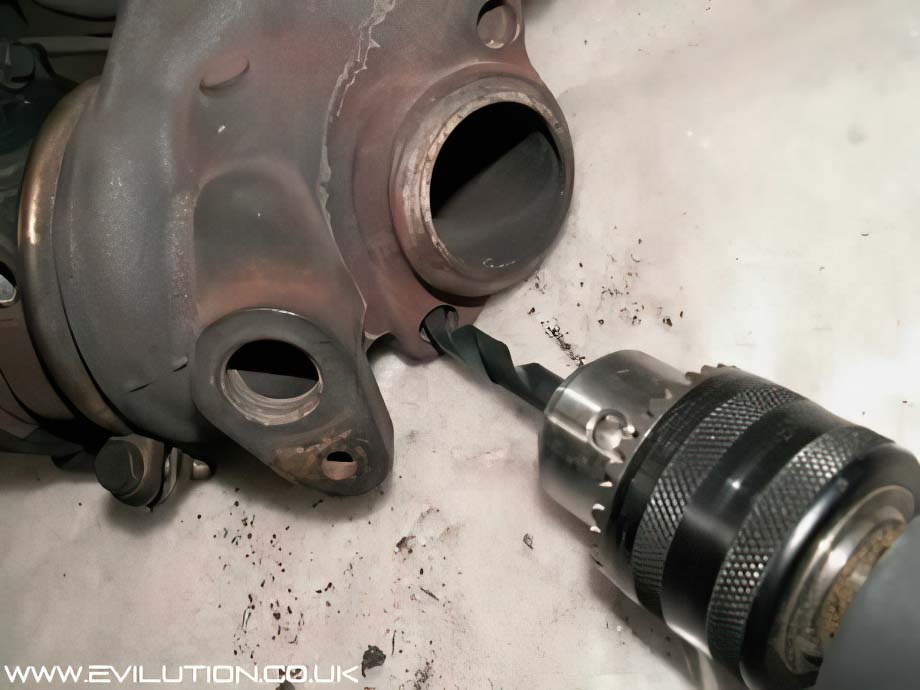 Run a cutting tap of the correct size into the hole. 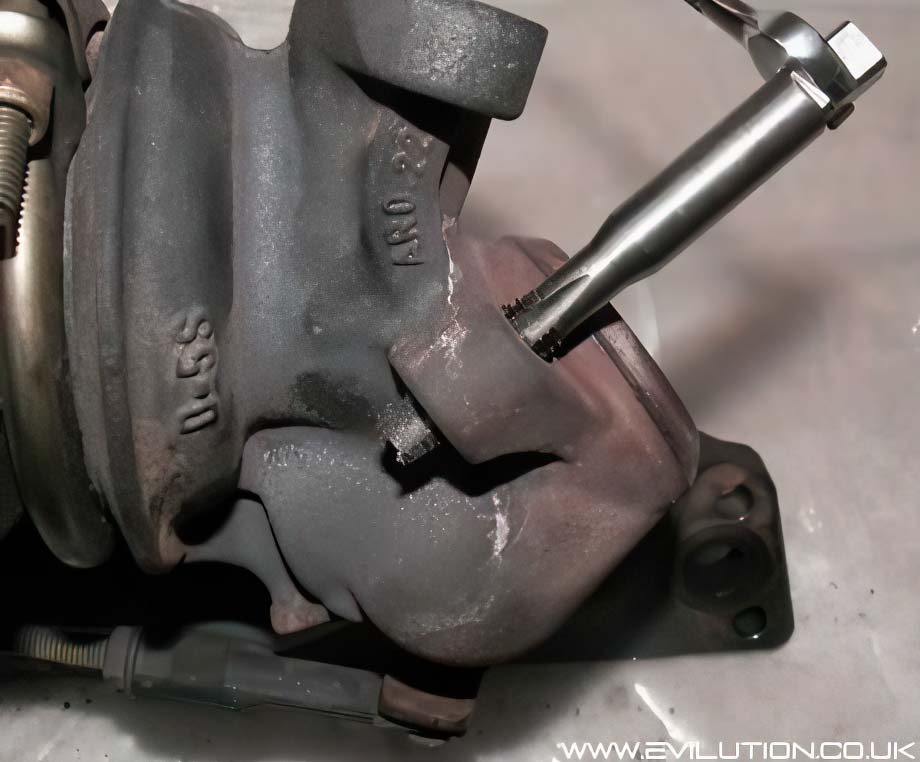 When using a cutting tap, keep the hole clear of swarf as much as possible. For every two turns you do into the hole, do one turn out. This will cut a cleaner hole and increase the life of your cutting tap. At this point you can use a finishing tap for a cleaner hole but it isn’t necessary.

It is quite important that you get the correct size drill and obviously the correct thread tap.

The first number of the stud size is obvious, 8mm is the width of the thread. The second number, in this case 1.25mm, means that the threads are 1.25mm apart.

If you have managed to remove the stud and the thread inside the hole is damaged or worn, you can do one of two things, oversize drill and tap (see below) or helicoil the hole.

A helicoil replaces the existing thread with a diamond cross-section sprung coil. The hole is drilled out and tapped to a larger size, the helicoil insert is then put into the hole under tension which keeps in in place. The inside diameter of the coil matches the original thread of the stud that was previously removed.

The advantage of the helicoil system is that generally the inserts are better quality metal than the part it is going into, this reduces the chance of the stud seizing again. The insert also allows a slight lateral movement reducing the chance of the studs snapping. Because of the spaced nature of the insert, it allows penetrating oil to get around the stud easier. This should make removing the stud much easier in the future. 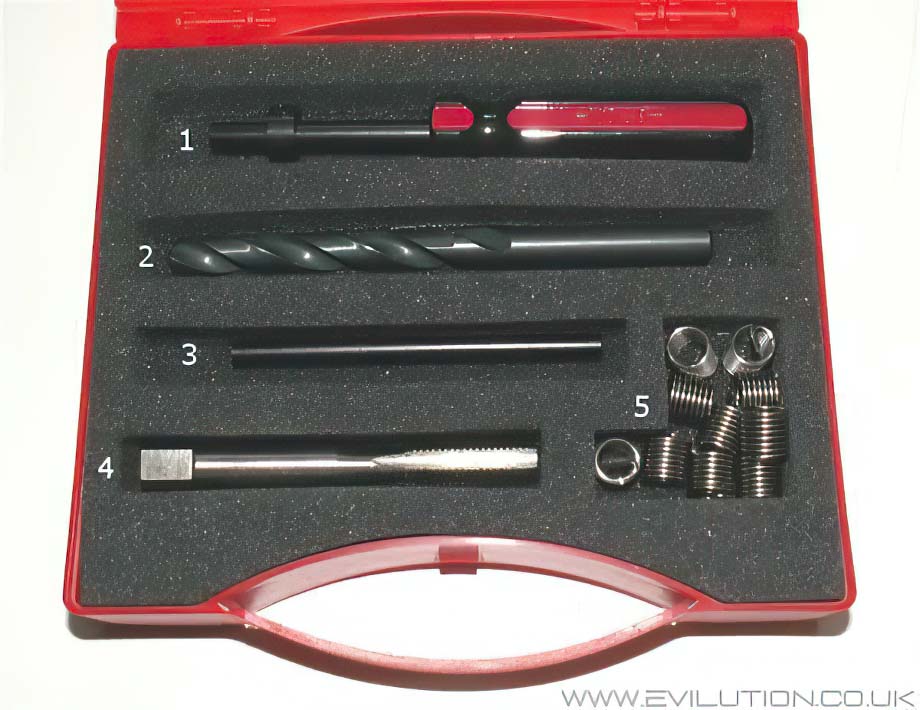 How To Use The Kit

Here is a worn thread on the turbo. 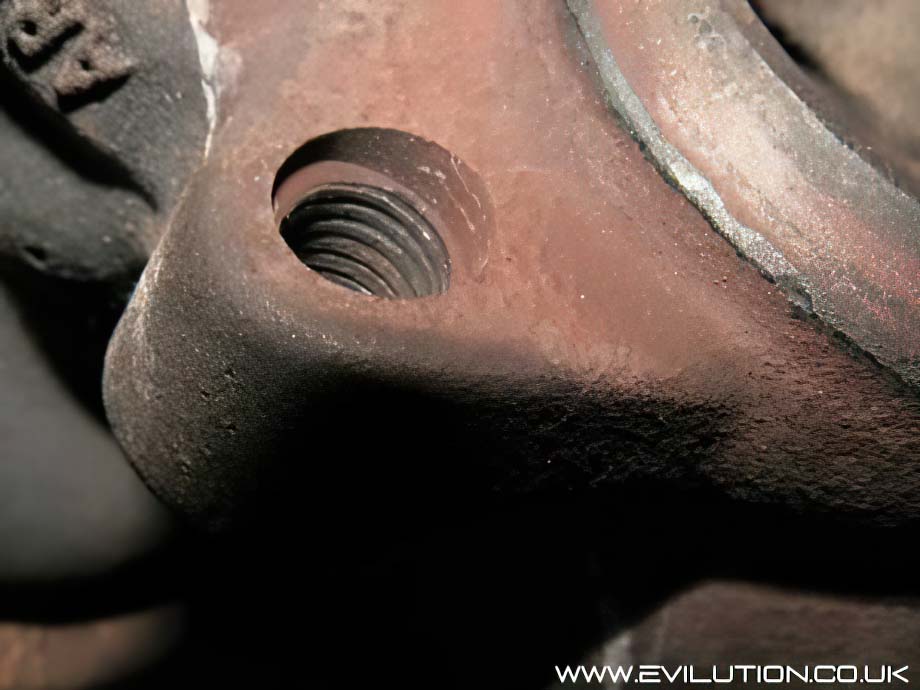 Drill the hole out, be careful if this is a blind hole (doesn’t go all the way through).

Screw the tap into the hole finger tight, make sure it is going in straight. 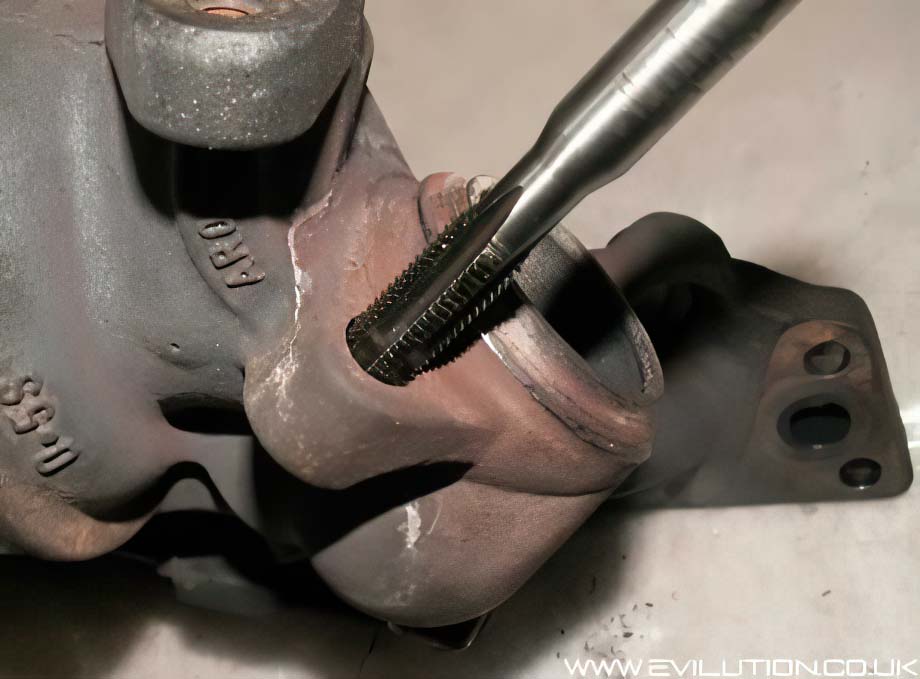 Use spanner or tap handle to screw the tap into the hole. For every two turns in, turn it once out for a cleaner thread. If it is a blind hole, remove the tap fully every 10 turns to clear the swarf. The tap should cut through with very little effort if going straight.

Here is the newly tapped hole to show the thread. 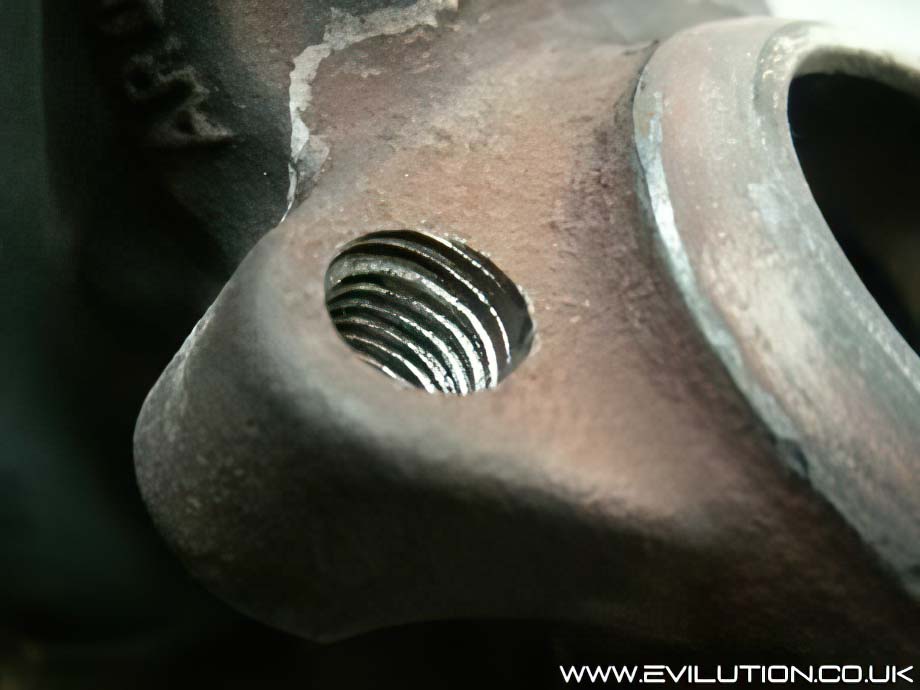 Place an insert onto the driver and offer it up to the hole. Push inwards and screw the insert into place. 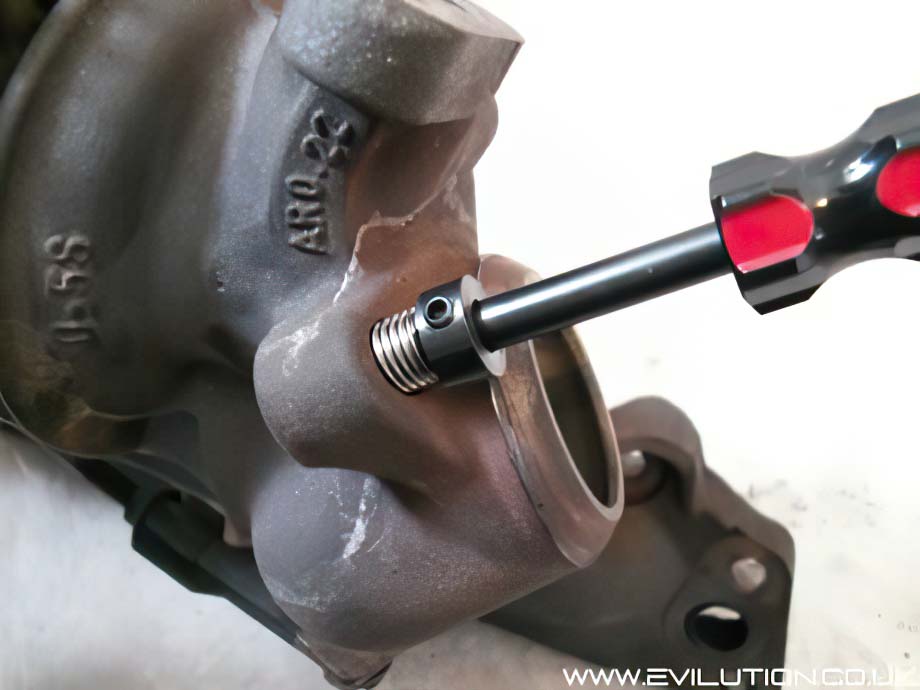 Once the insert is in place, remove the driver and the insert will stay put. 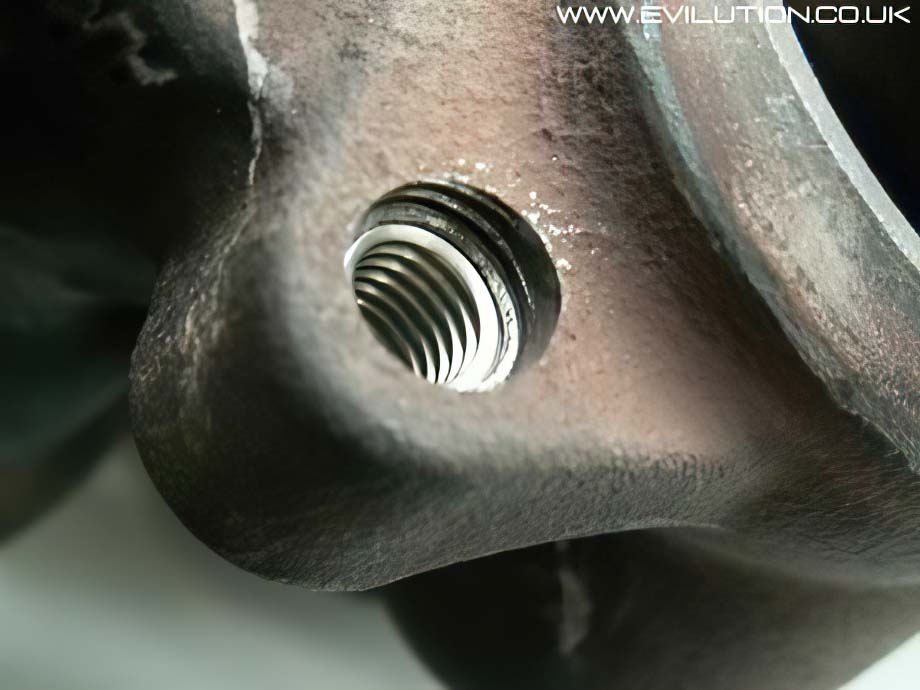 Place the tang breaker into the hole and strike it with a hammer, a small piece of the insert will come out (circled red below). 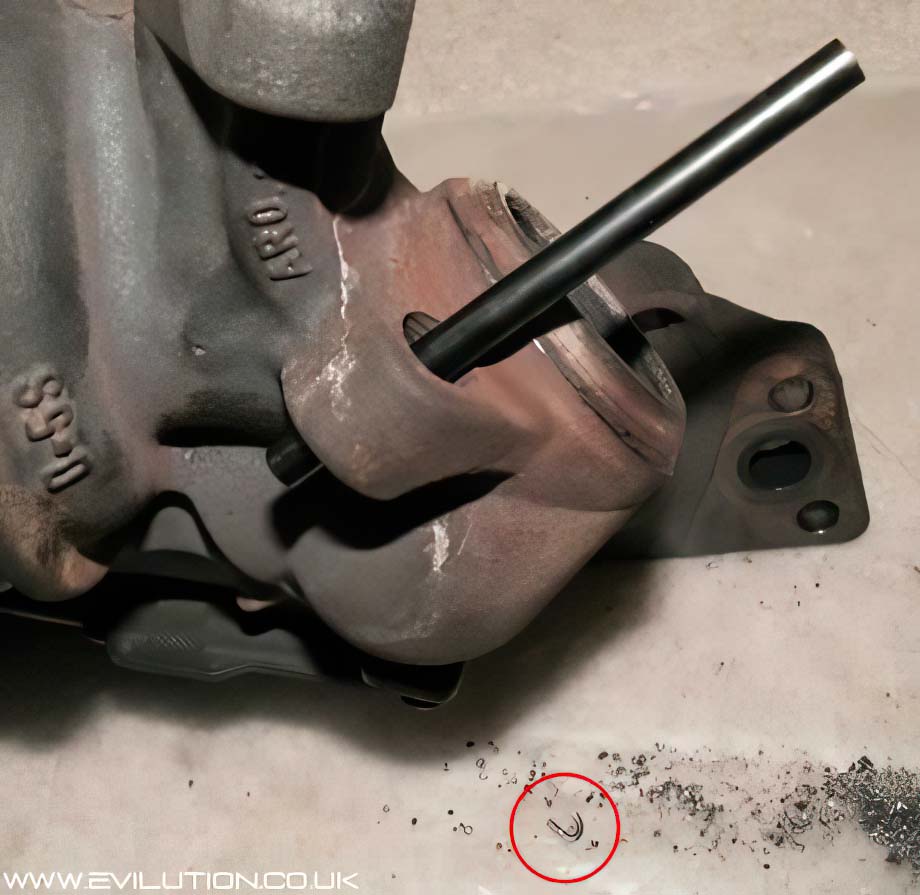 The insert is now ready to accept a stud.

An alternative to helicoiling if the original thread is damaged or worn.

A larger drill bit is used to open the hole up, this removes the damaged thread. Use a tap the next size up from the original thread, if you drilled out a hole for an 8mm stud then tap it out for a 10mm stud. It is very important to ensure you have enough spare material surrounding the hole to accommodate the new oversize hole.

This method has good and bad points, on the plus side you now have a thicker stud that has less chance of snapping. The drawback is you could possibly weaken the area by removing material from the hole, also consider that the new larger stud may be too wide to go through what ever it may have originally joined to. You may have to widen that too.

The easy-out is a cross between a reversed screw and a drill and is perfectly suited for removing studs that have broken off flush or inset.

A particular size hole is drilled into the head of the broken stud. The easy out is then screwed into this hole but the thread is reversed, as the thread tightens it locks against the stud and hopefully applies enough torque to spin it out of the hole.

It is a nice easy tool to use when it works, if it goes wrong and breaks, you are in trouble. Never consider a cheap easy out. If you break the head off the easy out you will have to drill it out before you continue. The easy out is made from metal far stronger than any bolt and most drill bits you will have, drilling one out is a long and arduous task.

I don’t recommend using an easy-out on small threads.

If you do snap an easy-out, you’ll have to heat it red hot to reverse the heat treatment or you’ll not be able to drill into it.

The concentric cam is a very basic tool designed to remove studs that still have a part of thread protruding. Although the first thing people try and use is a pair of pliers, this could worsen the situation. The tool slots over the remaining part of the stud and a standard ratchet is inserted into the top, as the ratchet is twisted it draws a knurled cam onto the stud. This wedges in place allowing you to use the power of the ratchet to twist the stud.

Depending if you have a welder, what type it is and how good you are with it, you can build up the snapped stud to create a new head to grip or you can weld on a new nut to give you something to spin. After welding, allow it to cool and then heat up the outside metal so it expands which can loosen the stud. I’m not a good welder by any means but there is always someone on YouTube that is. Check this.