How to take the steering wheel apart

Steering WheelThe clips are located underneath the red circles. (You can’t see them). Hold the steering wheel with the back towards you, the back panel will pull straight off. 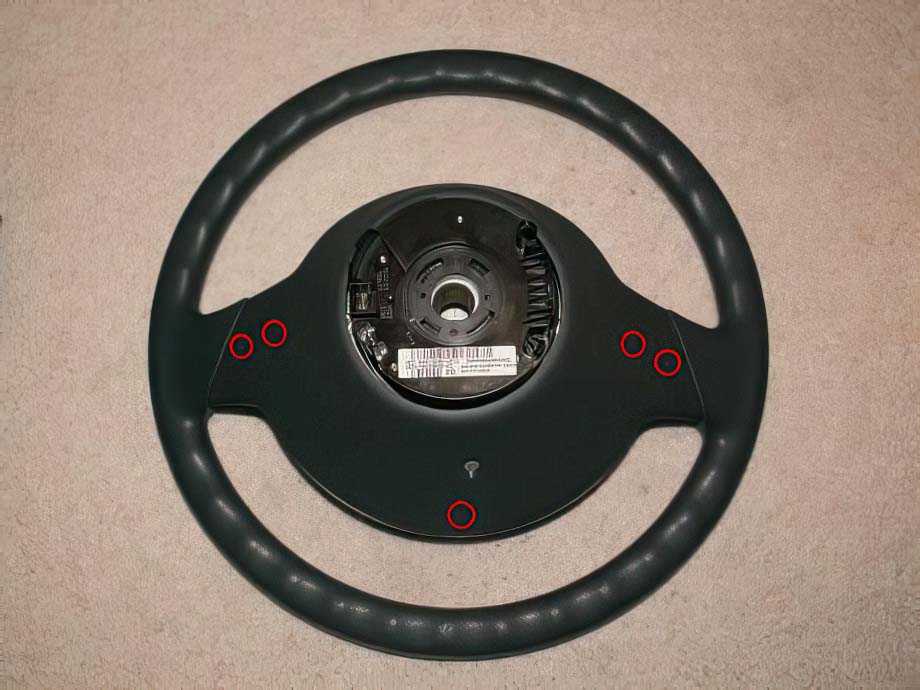 With the cover off, you can see the clips, the blue circled clips goes directly into the steering wheel and the red circled clips expand the clips for the front panel. 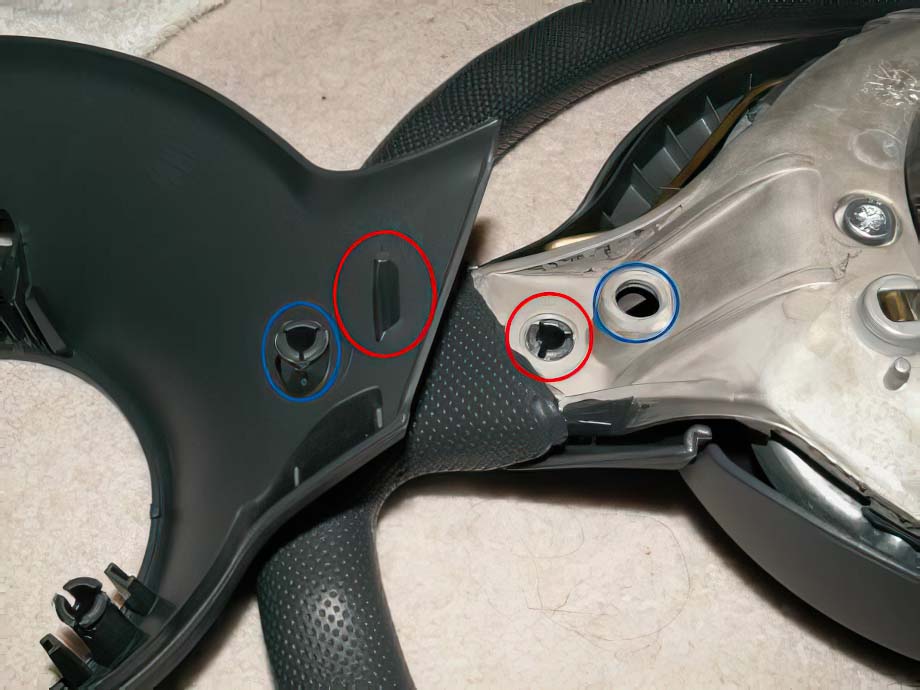 Circled in red below are the clips for the front panel/horn, push them to release the front. 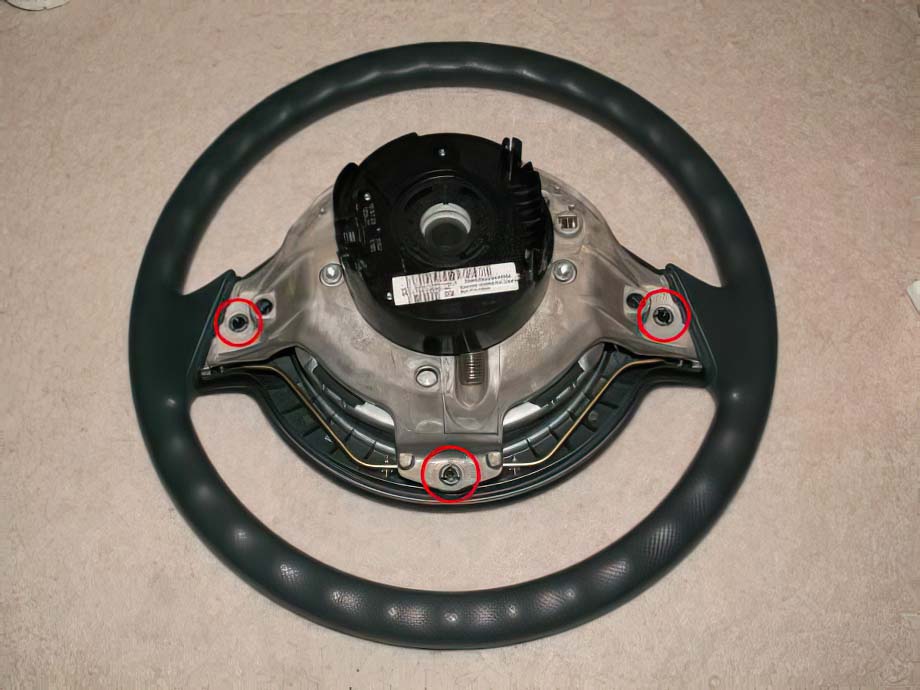 You will also have to bend the 2 plastic clips out of the way at each side. Again below and circled in red. 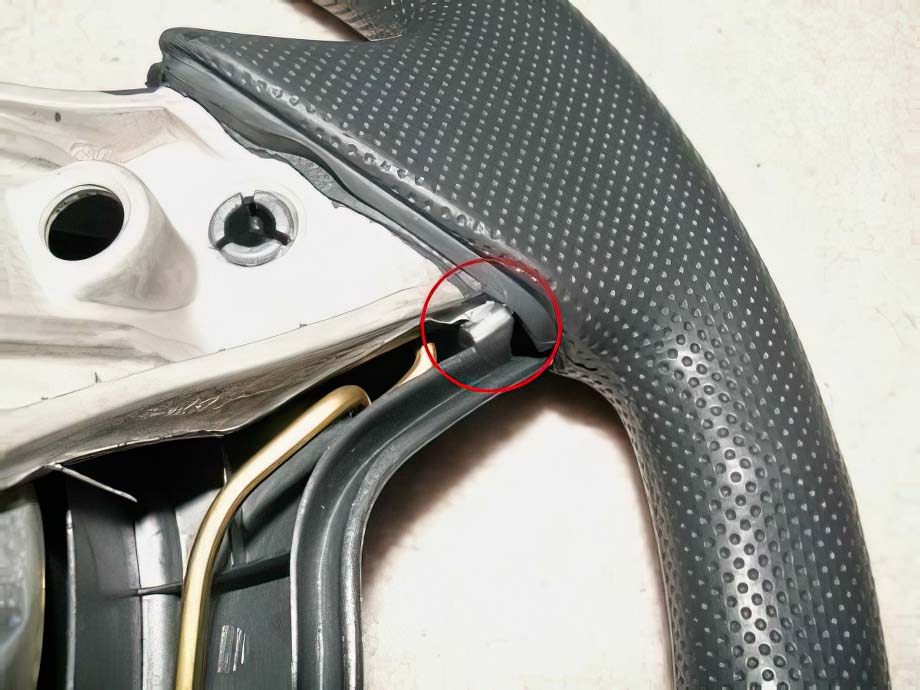 Below you can see the horn connections, the lower contact touches the metal bar which is actually part of the circuit. 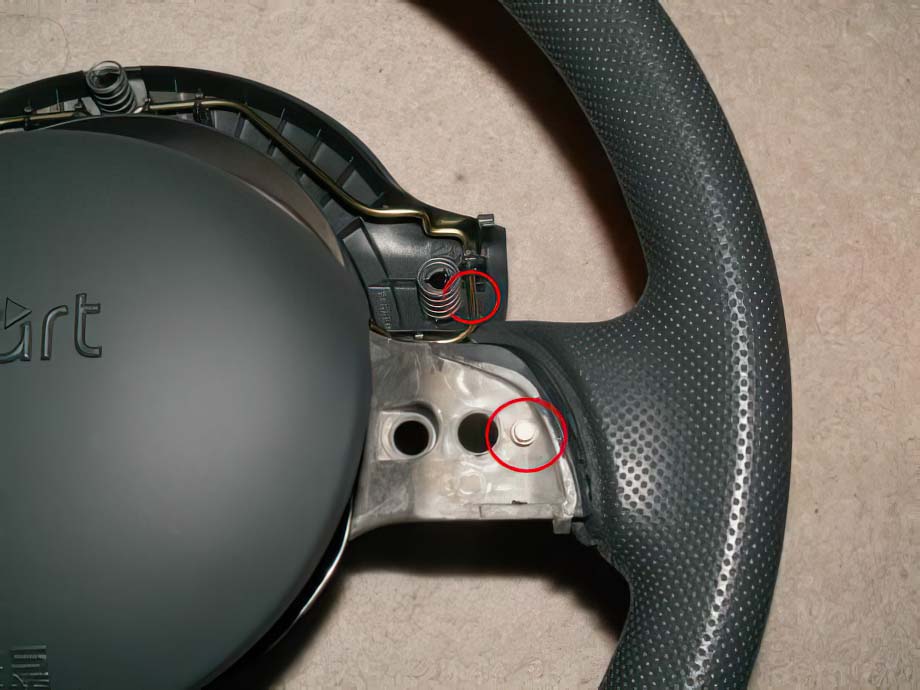 To remove the airbag, the rear bolts should be removed and the airbag pulled forwards. 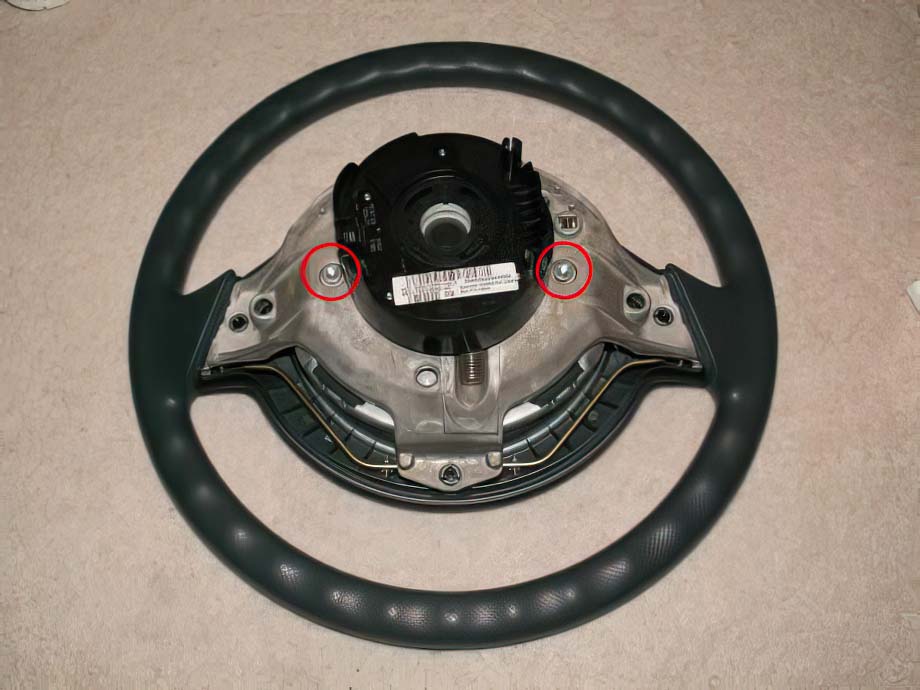 Use a 2mm allen key to remove the bolts from the holes. Once removed, the paddles can be pulled out very easily. 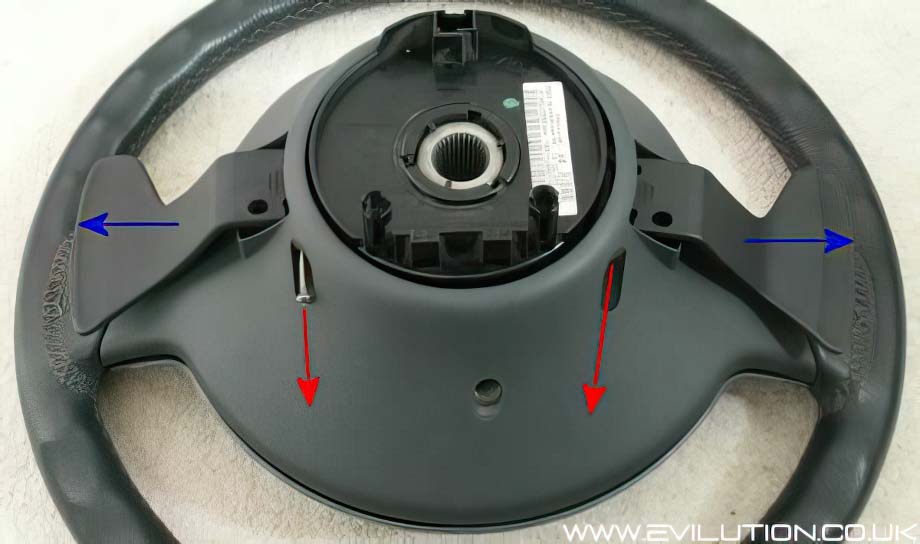 With the paddles out of the way you can disassemble the steering as shown above. 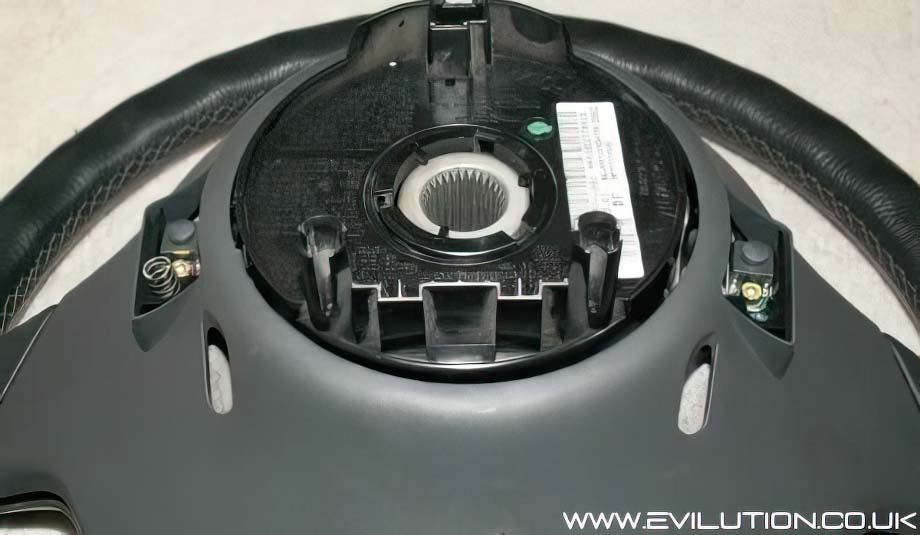 There are a few steering wheels out there that have the old style paddles that need the bolt removing but for some reason don’t have the holes to access the bolts.

If you have one of these then bad luck, your best chance is to drill some holes of your own to remove the bolts through. The other way is to rip the cartridge off which isn’t recommended as it can damage it beyond repair. 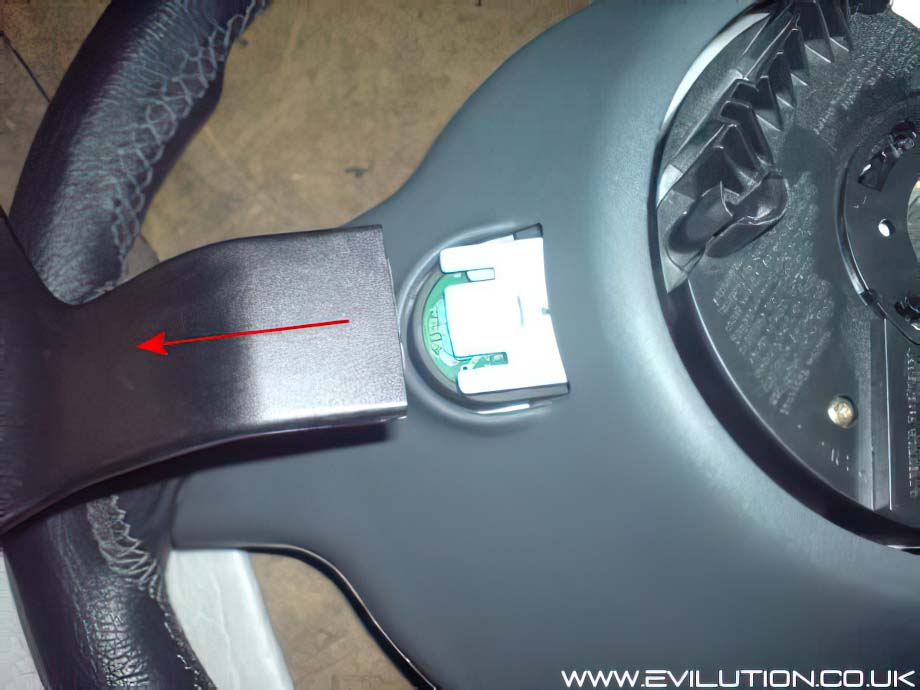 As long as you have a new style wheel you won’t damage it, the paddles clip over a tab. The wheel can now be dismantled as per the instructions for a normal non paddle wheel. To reinstall the paddles, just put them in place and push them back into their clips.

Remove the steering wheel from the car as shown here. Remove the 2x Torx10 screws that hold each paddle in place. 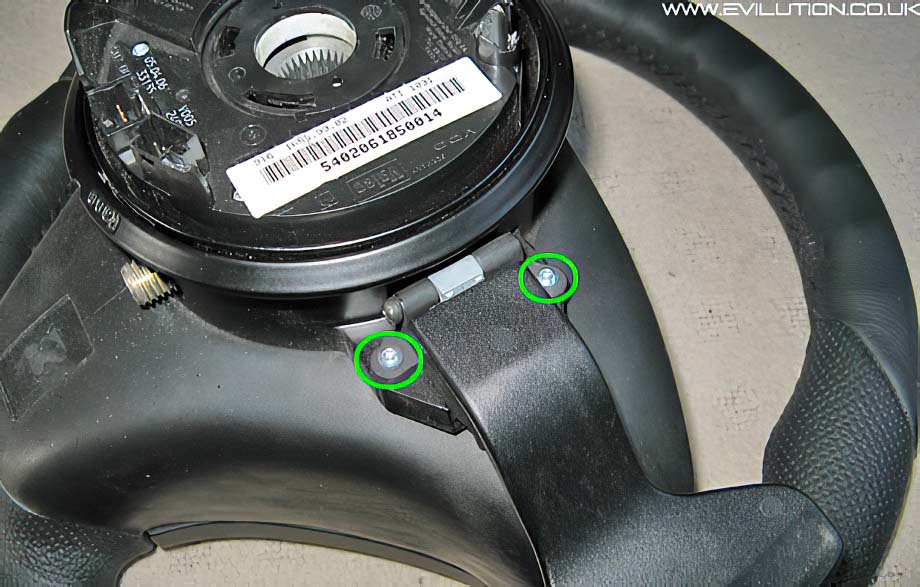 Slide the paddle out of the way. Remove the Torx30 bolts from both sides. 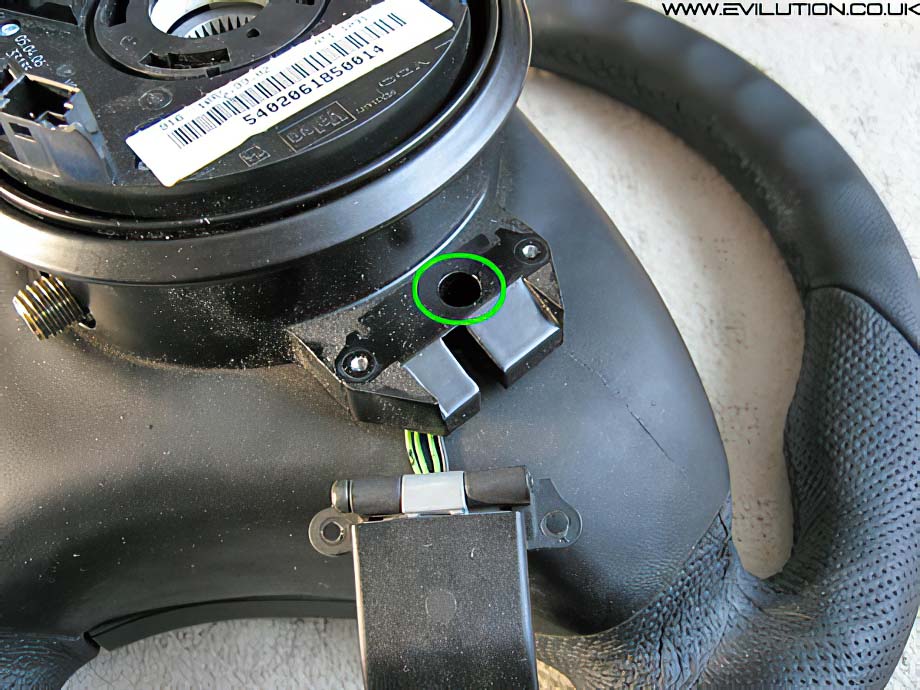 The airbag can now be slid off the front of the steering wheel. 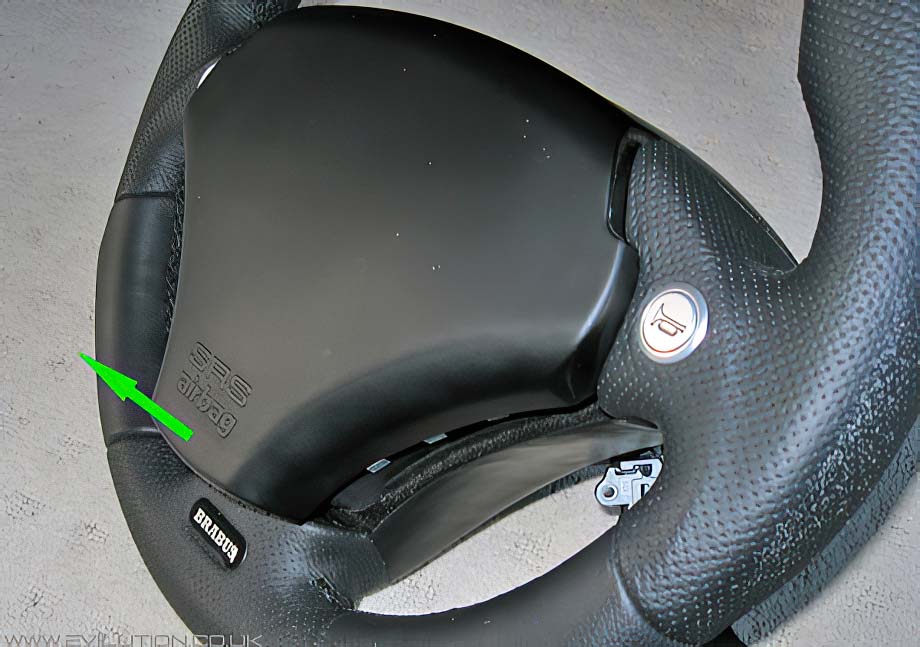 Pop off the yellow airbag connector. 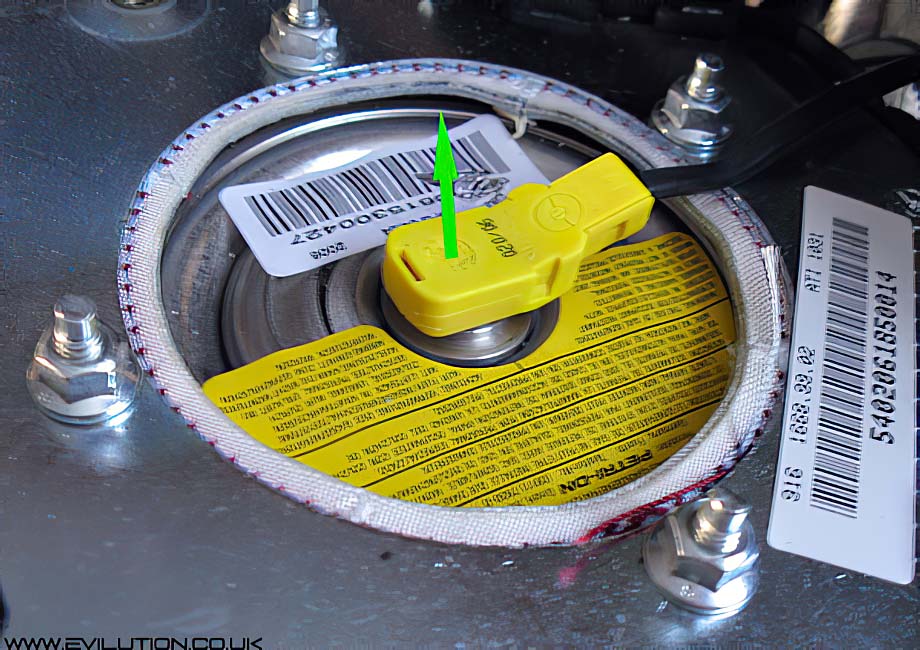 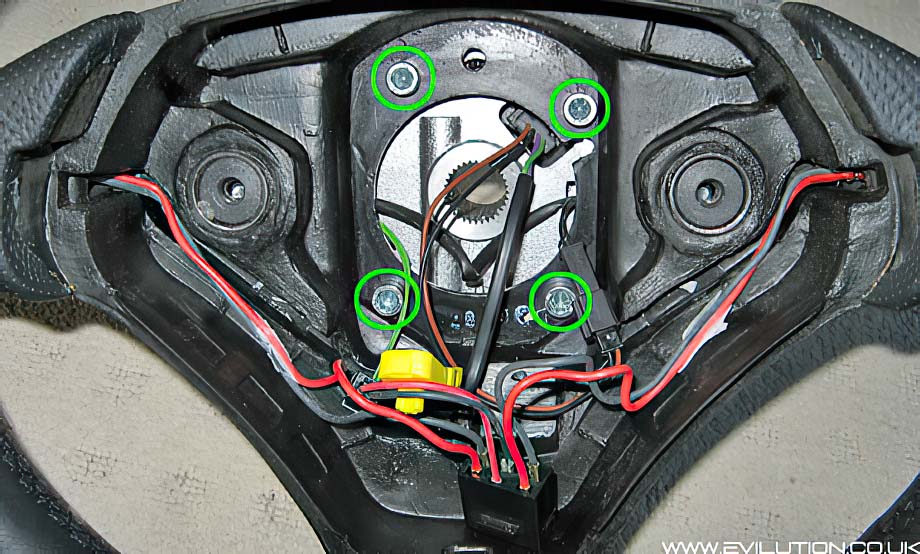 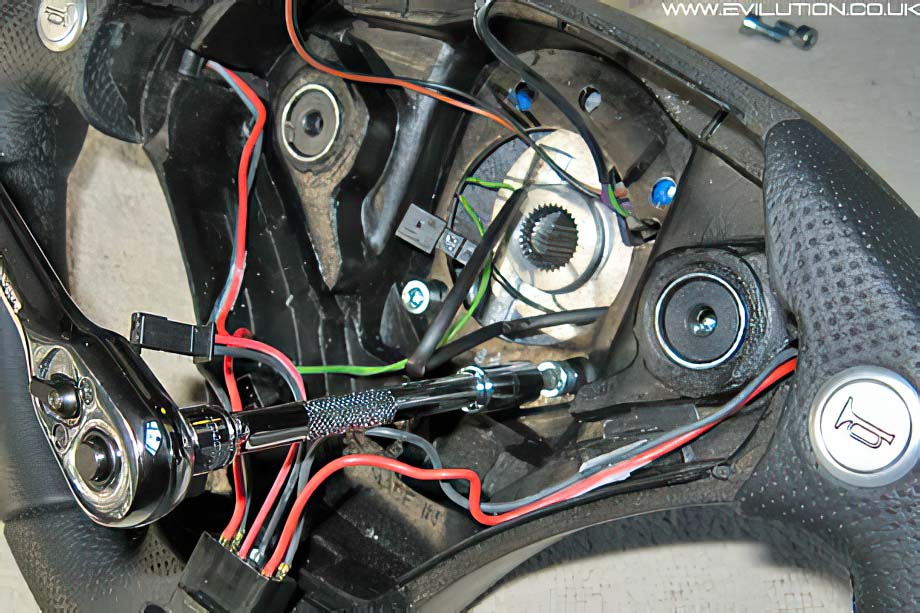 The metal retainer at the back of the steering wheel will now come away with the ESP cart. 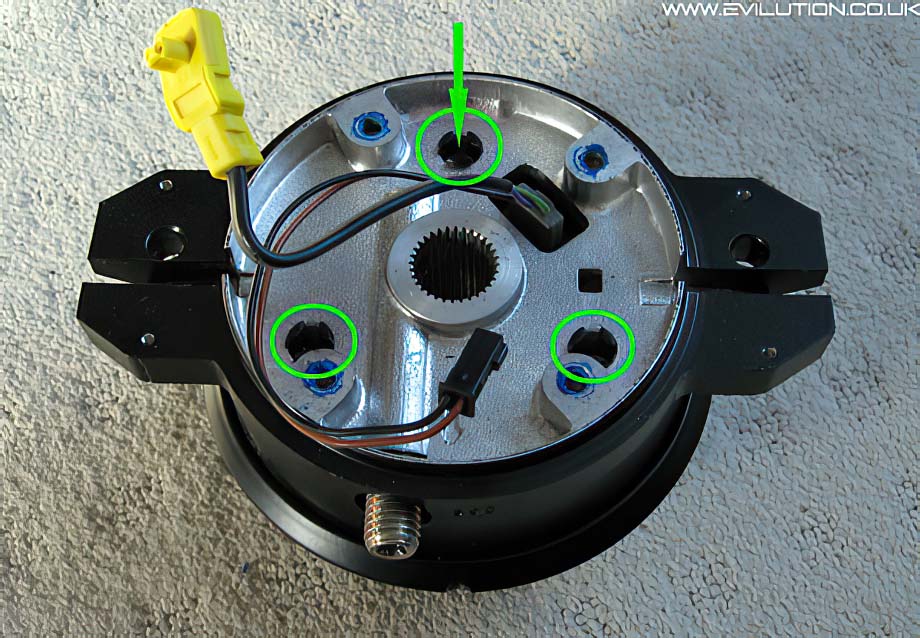 Press all 3 tabs through the metal retainer and the ESP cartridge will drop out. 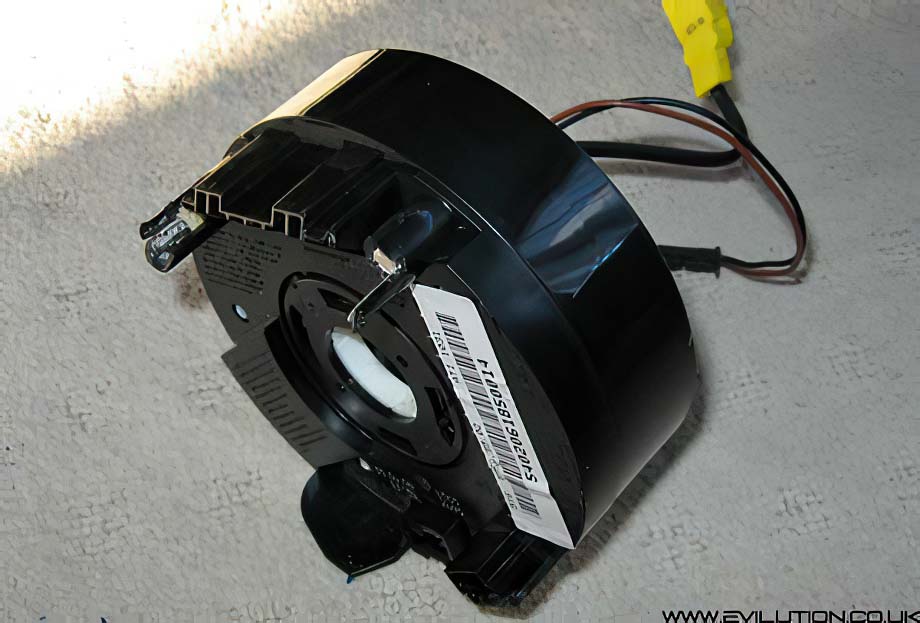 The ESP cartridge on the one that was delivered to me was faulty and had broken pegs. Swap the cartridges over for a working one and reassemble the wheel.

What Is Inside The Round Black Cartridge?

On the pre-ESP smarts the steering wheel was pretty basic, 4 wires in, 2 for the airbag and 2 for the horn. Not really much that could go wrong there. 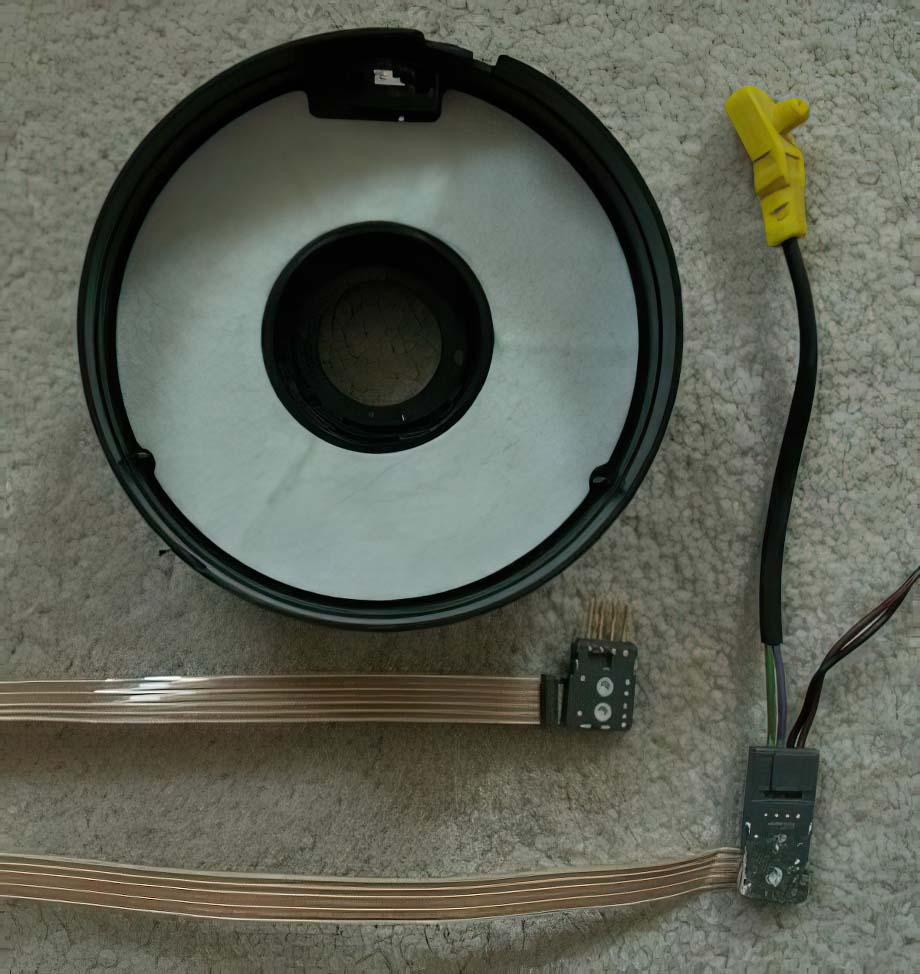 The yellow plug joined directly to the airbag, the brown wire was the earth and went to the metal frame of the wheel. The black wire connected to a metal rod that ran underneath the horn button, when the horn was pressed, the rod would move down and make contact with the metal chassis of the steering wheel. This complete circuit would activate the horn.

With the release of ESP, the steering wheel had to be changed. What was added was a wheel rotation sensor so the ECU knew which way the wheels were pointing. This info is cross referenced with the lateral movement sensor to determine skidding or sliding.

As before, the wheel contained the usual 4 wires and 2.5 meters of flat ribbon cable. The new wheel had a second connection dedicated to the ESP sensor.

The wheel rotation sensor is a large copper coloured perforated disc that works in very much the same way as a standard PC mouse. IR light is sent from a pair of diodes to receivers, the perforations are staggered in such a way that movement can be detected and even direction of movement can be decided.

The outer circle of perforations form a unique pattern which is very much like a barcode. These are read by the two inside LEDs seen at the top of the unit. These perforations tell the ECU exactly which way the steering wheel is facing.

So what about when the steering wheel has done one full rotation?

As the wheel rotates a full turn it adds 1/6th of a turn to a smaller wheel next to it (circled in red ain the above picture). This small wheel has a magnet in one corner which positions itself over 1 of 5 sensors called hall effect sensors. Depending on which one it is over determines how many times the wheel has rotated and in what direction.

The picture below shows the small wheel removed to show the hall effect sensors. 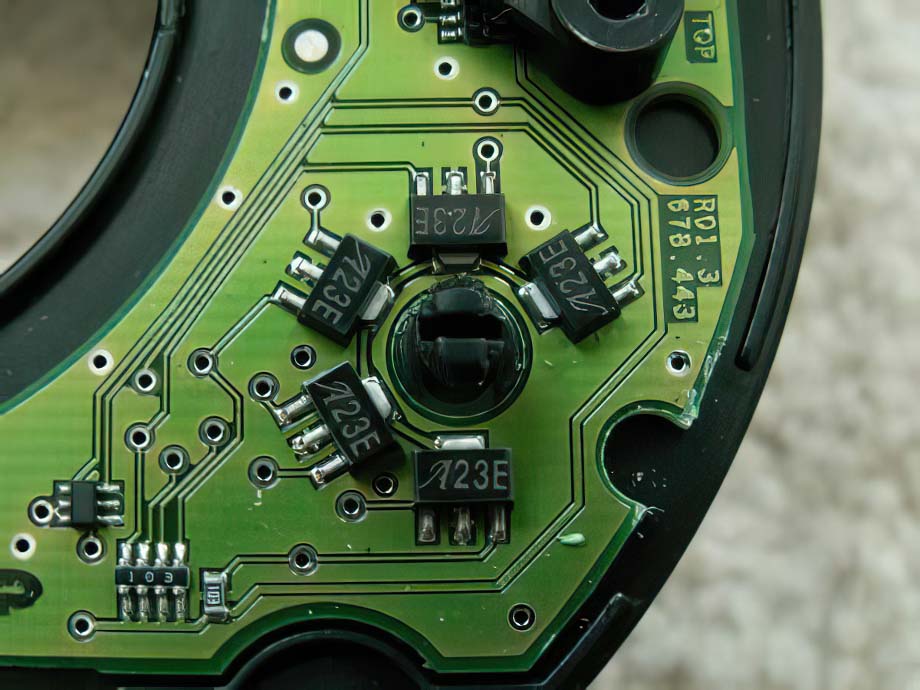 When the ESP wheel was first released there were many problems with wheels being out of alignment, if the cartridge was moved whilst it was off the car, the sensors would bring up a fault code and ESP light and the wheel was pronounced as being dead. Luckily now there has been an update to the Star computer system used by smart, it now has the ability to reset the alignment after the steering wheel has been installed.

Thanks to BlackMagic for the following additional info.

If the wheel is not reinstalled correctly or the black cartridge on the back of the wheel is not moving freely, i.e. it is not reinstalled on the two plastic stalks correctly, on an Gen2 smart then be prepared for some shaky smart action. i.e. when moving the wheel slightly the ESP is triggered and the back end gets very twitchy until the ESP system throws an error and gives up. To correct simply remove the wheel, ensure the cartidge is freely moving with your hands and then reinstall.